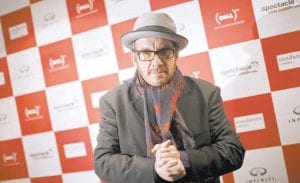 Singer Elvis Costello was photographed at a celebration of the debut of the Sundance Channel’s new show Spectacle: Elvis Costello at the Edison Ballroom. (AP Photo/Jason DeCrow)

During an interview with Elton John for the debut of his new Sundance Channel show “Spectacle,” Elvis Costello didn’t ask about stage costumes, boyfriends or “Island Girl.” Instead, the conversation turned to Laura Nyro, Leon Russell and David Ackles.

The two men closed the show, which airs Wednesday at 9 p.m., performing the obscure singersongwriter Ackles’ “Down River.”

“For all of (Elton John’s) successes, people don’t realize that he’s a great fan of music,” Costello told The Associated Press. “They assume that he’s this flamboyant guy who has hit records. They don’t know that it’s grounded in a great love and tremendous knowledge about music.”

Costello could as easily have been talking about himself. That background, his experience on the other side of interviews and a natural rapport with people in similar jobs more than make up for any deficits as a trained TV prober. They give “Spectacle,” a mix of music and talk, heft along with entertainment value.

As the first episode’s interview revealed, Costello’s goal was to get his guests talking about their enthusiasms, hoping they’d reveal more of themselves in the process.

During his session with a clearly nervous Taylor, Costello mentioned hearing a Gene Autry record recently that reminded him of Paul McCartney, and Taylor began talking about his days at Apple Records.

Reed picked up a guitar to show the proper way of playing “Sweet Jane.”

“It was funny because he wouldn’t seem to be a guy who would do an instruction thing,” Costello said. “He was in good humor throughout the show, contrary to a lot of people’s expectations about him. Maybe they approach him through a lens of darkness, solely concentrating on the image that is projected through a very limited slice of his repertoire.”

The Police’s show had an endof tour frankness and frivolity. It also illustrated another highlight of “Spectacle” — the music — when they and Costello played a version of “Watching the Detectives” that morphed into “Walking on the Moon.”

An amateur saxophone player who served two terms in the White House is on Dec. 17th’s show. Former President Bill Clinton talked about music, not politics, saying how he gave up the dream of being a professional musician when he looked in the mirror and realized he’d never be good enough to be the best.

Costello’s closest experience to “Spectacle” was a few nights subbing for David Letterman. He’s not sure whether there will be a second season, noting the difficulty juggling his family and guests’ schedules, without neglecting his day job.

The freedom to be flexible with format, and to talk in-depth with heroes like Smokey Robinson, made it a good experience.

“For every frustration, for every idiotic suggestion that you get when you work in television, the great moments far outweigh the minor frustrations,” he said.

On the Net: http:// www.sundancechannel.com