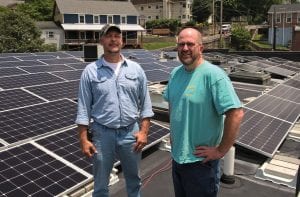 Seth Long clicked a button on his laptop and a graph popped up showing the amount of electricity HOMES Inc. is buying from Kentucky Power, and the amount it’s selling back to the utility from solar panels installed last month.

As of last week, the agency expected to make the payment on the $70,000 loan it got to buy the solar electric system, pay its electric bill, and still spend less on electricity than it did before the installation.

Solar power installations completed in the past month will insulate HOMES and two other Letcher County nonprofits from rising electricity costs for the next 20 years, Long and others said.

Solar panels were installed on the roofs and turned on in June at HOMES, Appalshop, and Hemphill Community Center, and officials at all three organizations say they are seeing drastic reductions in utility costs, despite the cost of the systems. 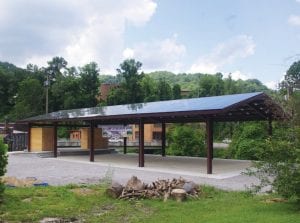 Solar collectors on Appalshop’s new outdoor music pavilion, designed by local architect Bill Richardson, are expected to save the organization $100,000.

At Appalshop, Communications Director Alexandra Werner-Winslow said the 192 panels installed on an outdoor music pavilion and the 42 on the organization’s Boone Motor Building across Madison Street will produce enough electricity to power 12 average homes, or about 70 percent of the electricity Appalshop uses.

So far, only the pavilion has been turned on because the net metering system on the Boone Motor Building is outdated and has to be changed, but the nonprofit is still producing all of the power it uses, she said.

“When we also have the panels on the Boone Building, we will definitely be ahead,” Werner-Winslow said.

Hemphill Community Center, which runs a woodfired pizza and bread bakery as an income stream to keep the doors open, turned on solar panels June 15. Board secretary Gwen Johnson said she hopes the panels installed there will alleviate the financial difficulties caused by $1,500 a month power bills in winter. 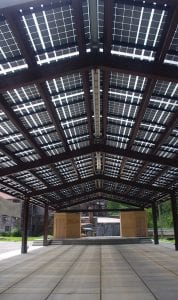 SHINING THROUGH — Solar collectors on the roof of the new music pavilion at Appalshop reflect the sky. Inside, sunlight filters through the collectors, keeping it shady, but light, and supplying up to 70 percent of the electricity Appalshop needs. (Photos by Sam Adams)

“It takes a lot of bread and a lot of pizza to pay the power bill — more than we can sell,” she said.

Johnson looked at the Kentucky Power web portal for the community Friday for the first time since the installation.

“Oh, my goodness,” Johnson said. “It’s kind of like the payment is going to make itself with only two weeks of using solar.”

She said summertime usage for the former school building is typically around $500 a month even if nothing is past due. This month, there is $404 in past due charges from winter, but only $162 in current electric charges.

Kentucky Power’s demand usage fee for commercial customers tripled in January, which all three groups said had a major effect on their finances. Long said he expects the prices to increase even more as major electrical users such as coal mines continue to lay idle, something he thinks is likely because so many utilities have switched to natural gas.

Since Kentucky Power is investor owned, those investors are entitled by law to a return on their investment, and Kentucky Power will keep asking for rate increases to keep that profit margin up, Long predicted.

“What we did here is not a political statement,” Long said, pointing to the thick, green area on the graph representing the amount of electricity flowing from the HOMES Inc. building to the power grid. “It’s not about whether we like coal or not, it’s a business decision. It’s looking at the bottom line.”

Appalshop, HOMES, Hemphill Community Center and Kingscreek Fire Department joined together as part of the Letcher County Culture Hub to advertise for proposals for installing the systems, and chose two companies — Solar Energy Solutions of Lexington and Wilderness Trace Solar of Danville — to make the installations. Solar Energy Solutions, which did the work at HOMES and Appalshop, let HOMES install its own system with its help, so employees there could gain some knowledge and experience for installing systems later.

Kingscreek is still trying to decide whether it can follow the other three, Fire Chief Bill Meade said. The cost would be nearly $50,000, and he said the board is still trying to figure out whether and how the fire department could repay that money.

Long said HOMES got a $70,000 loan for 20 years from the Mountain Association for Economic Development to pay for the system, but it is projected to save $70,000 in just nine and a half years. The system has a 25-year warranty.

The biggest worry about the payments for many is a state law passed earlier this year that will allow power companies to cut the amount they give customers with net metering to just the value to the utility, rather than the same amount they charge customers for power. Under that law, anyone who installs solar panels before the end of the year will be grandfathered into net metering and have 25 years of tax credit availability so it won’t affect how HOMES, Appalshop and Hemphill Community Center are charged, but it will affect people who choose to install solar panels after this year.