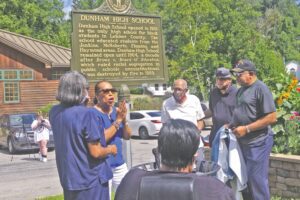 Alumni of Dunham High School gathered in Jenkins this past weekend to dedicate a historical marker memorializing the school, which educated Black children from Jenkins from 1931 to 1964.

The state historic marker is one of two plaques placed in front of the Jenkins Public Library, just down the hill from the site of the school, which burned in 1964 leaving only a small, concrete block annex standing. Former students traveled from as far away as Texas and Florida to attend the gathering and sing “Lift Every Voice and Sing” and “Dear Old Dunham High School” as they stood around the unveiled monument to the Blue Devils.

Carolyn Hollyfield Rodgers, who chaired the committee to place the marker, spoke from the steps of the library before the unveiling, along with Jenkins Mayor Todd Depriest, Alli Robic of the Kentucky Historical Society, and Jenkins resident Ked Sanders, who oversaw building the flowerbeds behind the plaque.

“I don’t know how she worked from 1,000 miles away to put all this together, but she did,” Sanders said. 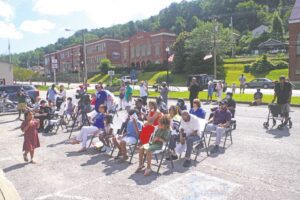 About 50 people including current Jenkins residents, local officials and Dunham High School alumni gathered to watch the unveiling of the plaque. (Photos by Sam Adams)

Sanders’s wife, Eileen Sanders, is a member of the Jenkins Independent Board of Education and located school records related to the school when Rodgers requested information. She also got her husband involved. Ked Sanders, who attended Jenkins High School on Main Street across from the road that led to Dunham High School, said he never knew what went on behind the scenes in the school district until Eileen Sanders dug up the records.

“We found out behind closed doors, the school administrators, the school board and some people in the community were coming up with every flimsy excuse they could to keep from integrating,” he said. “If they were alive today, I’d hope they be here to apologize, but since they’re not, I want to apologize for them.”

Jenkins schools were not integrated until 10 years after the Supreme Court’s famous Brown v. Board of Education decision, which declared “separate but equal” was unconstitutional and ordered schools to desegregate.

Rodgers, a retired teacher who lives in Houston, Texas, raised money to get the state historic marker for Dunham High School, and an interpretive panel telling the story of segregation and integration in the mountains. Much of the money came from the Jenkins Centennial Committee. The City of Jenkins supplied much of the labor, and volunteers provided specialized labor. Mack Fultz, a former Letcher County magistrate, and retired stonemason used stone hauled in by former Jenkins Police Officer Paul Thompson to build the flowerbeds with Sanders’s help.

Rodgers thanked the people who made the marker possible, and thanked the group of about 50 people who sat outside in 90-degree heat to attend the ceremony. She said she had visited her son in North Carolina, and he and his family wanted to see where she had grown up. They drove to Jenkins, and she took them to see the school.

“When I arrived on the property, it was in disrepair and destruction,” she said. “It made me want to do something.”

Rodgers noted that until the school was built, school districts were only required to teach African-American children through seventh grade, and anyone who wanted a high school education had to go to expensive private boarding schools. The graded school for Black children in her community was beside a coal tipple in Dunham, and the tipple was so loud, teachers couldn’t be heard. The graded school was moved in the high school building, and the name was changed to the Dunham High School.

Rodgers, whose father Collins Hollyfield sold popcorn under the name Popcorn Joe and kept the fire stoked in the furnace at Dunham High School, said she never realized there was racism in Jenkins until she was an adult. The more she dug into the school records, the more she realized how bad things were.

She said the state Department of Education sent a letter to then Jenkins Superintendent C.V. Snapp in 1957 asking him to please respond with the Jenkins plan to integrate schools, given that it had been three years since the Brown v. Board of Education decision.

Sam Taylor (Director of Curriculum at the Kentucky Department of Education) “had made this request six times, and six times he had gotten no response,” Rodgers said.

Rodgers said she was glad to be in school with her friends, and to have Black role models, but “we would liked to have had a nice laboratory, too.”

The failure by the district to integrate continued through two more superintendents.

“ Finally, Sam Taylor said, don’t make me come up there,” she said, paraphrasing his letter. When he did come, he found the school building and curriculum was deficient, and the district was forced to close it.

Once that happened, Rodgers said, Letcher County sent Black students from that district to Jenkins as well.

Closing the school also had unintended consequences. The district did not renew the contracts of African-American teachers, and students at Jenkins High School were not allowed to have a prom in 1965, Rodgers said, to keep students of different races from “mixing.”

Pastor Ben Jackson, DHS Class of 1964, said many more alumni wanted to come to the event on Saturday, but were afraid to risk it because of COVID-19. Jackson said despite learning the lengths the board of education went to in order to prevent him and other African-American children from attending the white schools, he is not angry.

“Jenkins during that time was Jenkins at that time,” he said. “I don’t fault nary one of them. God knew this day would come one day.”