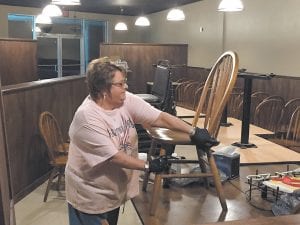 Jackie Colwell worked to finish chairs at the new Prime 606 Steakhouse this week.

Prime 606 Steakhouse is scheduled to open March 1 in the Parkway Plaza Shopping Center in West Whitesburg, next door to Colwell’s popular Las Peñas Restaurant, which opened in 2007.

“That’s the target date,” Colwell said of the 115-seat restaurant. “It’s just according to whether we run into any snags.”

Colwell said Prime 606 will be the only steakhouse within a 50-mile radius that sells steaks graded as USDA Prime, the highest grade of beef you can buy and a grade that is rarely sold in supermarkets, which usually feature the “Choice” or “Select” grades of beef.

“We’re going to handle the best meat that’s out there,” Colwell said, adding that his steaks will be shipped fresh from the Knoxville location of U.S. Foods, a publicly held company that supplies steakhouses across the country. “You can’t buy this meat at the store.” 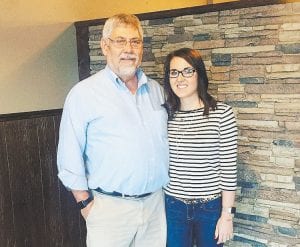 Charles Colwell, left, and his daughter, Amanda Maggard, stood near the front of Prime 606 Steakhouse Tuesday.

When Prime 606 opens it will be competing for business with steakhouses elsewhere in the region such as Texas Roadhouse in Pikeville and Reno’s Roadhouse in Wise-Norton, Virginia. Colwell is confident that diners will choose his Whitesburg restaurant over those locations because he will be the only one of the three that sells Prime grade of angus. Texas Roadhouse and Reno’s sell the Choice grade, which next down the ladder.

Colwell plans to hire between 12 and 15 people to staff the restaurant, including two cooks who he plans to pay an equal salary along with a $50 per day bonus for meeting quality-related goals.

“I hope I have to pay that bonus every day,” he said.

The menu at Prime 606 will feature 11 cuts of beef — two sizes each of filet mignon, and sirloin, a New York strip, three sizes of ribeye, steak tips cut from filet mignon, and, on weekends only for now, two cuts of prime rib.

The restaurant will offer Caesar and Cobb salads and a number of appetizers including oysters on the half-shell. Among the desserts that will be featured are chocolate cake, New York-style cheesecake, and crème brulée.

“It’s going to be something people can be proud of and say, ‘this is as nice a place as there is anywhere,’” Colwell said.

Colwell said pricing for steaks will start at $12 for a Prime grade cut of sirloin.

The restaurant will be operated by Colwell, 62, and his 26-year-old daughter, Amanda Maggard, who recently moved to Letcher County from her native Perry County. Colwell’s wife, Jackie, is also assisting.

Maggard said she wants the restaurant to be “a place for people to come, enjoy themselves, eat good food and have a good experience.”

“I want people to have a good steakhouse at home instead of having to go to Pikeville,” she added. “We’re excited about it. We make a good team.”

“One way or the other we’re going to serve a good steak,” added Colwell.

Colwell said the restaurant is taking applications for “every restaurant job” ranging from cook to dishwasher. Persons wishing to apply should visit Las Peñas during operating hours, he said.