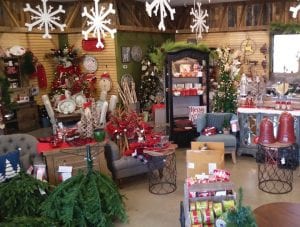 A pop-up Christmas store, we think a first for Whitesburg and Letcher County, is filled with decorations. The Home for the Holiday store is located at Pine Mountain Junction. (Photo by Sam Adams)

It’s beginning to look a lot like Christmas in Letcher County.

Every store, it seems, has Christmas aisles with decorations and wrapping paper, and businesses and homes are starting to come alive with Christmas trees, twinkling lights and plastic likenesses of jolly ol’ St. Nick.

And in the corner of a shopping center in Whitesburg, something new has popped up — a pop-up shop that may be the first of its kind in Whitesburg.

“Everybody that has come in has made the remark that this looks like Gatlinburg,” said manager Renia Maxie as she restocked shelves with Christmas decorations in Home for the Holidays, a pop-up shop beside Pine Mountain Grill.

Pop-up shops are temporary businesses that spring up just before a holiday and close when the holiday passes. Pop-up fireworks stores are common around Independence Day, but this may be the first time a shop has opened in Whitesburg for any other holiday.

Missy Matthews, who owns Pine Mountain Grill, said she had had an open house with Christmas decorations in the banquet room there for several years, but that was less than an ideal situation.

“It just limited us,” she said. “We’d have to turn away people who wanted to use the banquet space and it limited us for Sunday buffet. It was just cumbersome.

Matthews also owns the strip of stores next to the restaurant, and the space formerly occupied by Pine Mountain Outfitters was vacant. She decided to try doing the open house there, and when she mentioned it to Heather McPeak, owner of Southern Bliss next door and Dream House Furnishings in Pikeville, McPeak wanted to partner on the Christmas store.

The pop-up store is owned by Pine Mountain Grill, Southern Bliss, and Dream House Furniture. It opened up September 25 and sells nothing but Christmas decorations and Christmas gifts.

“We have gifts, we have decorations, we have the sweaters — anything you would want for Christmas,” Maxie said.

Matthews said the store was originally intended to stay open for just one month, but “It’s been so popular we decided to keep it open longer,” she said.

Matthews said the shop will probably remain open a couple of more weeks, offering different sales every day until time for it to close. As the stock thins out, she said the store won’t look as inviting, so she will move everything back into the Grill once it reaches that point.