New store offers reasons to get outside 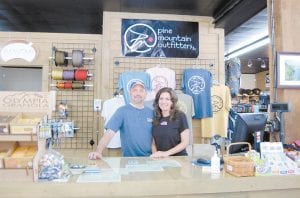 Bill and Patricia Bentley, of Whitesburg, own and operate Pine Mountain Outfitters. A grand opening event for the outdoor retail store, which is located in the old Caudill Lumber Company building at Ermine, will be held June 2.

Bill and Patricia Bentley love to hike, camp and ride bicycles. When they go on an outdoor adventure outside of Letcher County, they always shop at independently owned outdoor specialty stores.

“When we are on vacation, we won’t pass up an outdoor store,” said Patricia Bentley, a special education teacher at Arlie Boggs Elementary School.

With the closest outdoor store being located almost two hours away from Letcher County, the Bentleys decided to open their own store in the old Caudill Lumber Company building at Ermine.

“I think people in this area deserve a place where they can shop without traveling to Lexington or Tennessee,” said Bill Bentley, who is a retired postal worker. “You don’t have to be a mountain biker or climber to find something you would like here. We want the whole family to find something, regardless of what their interests are.”

The Bentleys thought about naming their business High Rock Outfitters, but that is the name of a store in Lexington, N.C., and Bill Bentley thought people might confuse the two.

The old lumber company building across from Walmart was remodeled last fall.

“We wanted to keep it rustic looking,” said Bill Bentley. “The floor space was exactly what we needed.”

The Bentleys had wanted to open the store in time for the 2011 Christmas shopping season, but it took longer than expected to get everything ready.

“With some of our vendors we had to go through a long selection process,” said Bill Bentley.

The Bentleys had to wait five months before The North Face, an American outdoor product company, approved Pine Mountain Outfitters LLC to carry its merchandise.

The Bentleys continue to learn on the job, have now found out that seasonal orders need to be placed seven months in advance.

“It seems like we learn something every day about ordering,” said Patricia Bentley.

The Bentleys will be attending a retail outdoor show in June in Chattanooga, Tenn., to view merchandise for spring 2013.

Pine Mountain Outfitters opened for business on March 12, and will celebrate its grand opening on Saturday.

“Business is better than what we anticipated this early,” said Bill Bentley.

So far hammocks, flip-flops, T-shirts, rainwear and knives have proven to be popular sellers.

Bill Bentley said he hadn’t realized that motorcyclists, who travel heavily, use much of the same equipment as hikers and campers when they travel.

The North Face, which specializes in outerwear and footwear, has been the biggest-selling clothing brand. Patricia Bentley said that before Pine Mountain Outfitters opened, people from this area had to travel to cities with malls to buy The North Face products.

“That was a big reason to open a store, to keep people from traveling to Tri-Cities or Lexington to get the same stuff,” said Bill Bentley.

Customers have been coming to Whitesburg from surroundings areas including Pike, Perry and Floyd counties as well as Virginia.

Patricia Bentley said several people have walked into Pine Mountain Outfitters and said “We needed a store like this.”

“We have heard it a thousand times,” added Bill Bentley.

The store carries local and regional maps, trail guides and books to help prepare people for trips. Bill Bentley said he would like to carry more books by local authors.

“A lot of people travel from here to Red River Gorge and people do caving where they need the ropes and harnesses,” said Bill Bentley. “A lot of people have requested climbing gear.”

By popular demand, a line of youth clothing by The North Face will be available at Pine Mountain Outfitters in October.

Patricia Bentley, whose favorite outdoor activities are hiking and camping, hopes the store can steer area youth to get interested in outdoor adventures. Bill Bentley, who prefers hiking and fishing, said the store may help convince children to away from television and spend time outside.

The grand opening of Pine Mountain Outfitters will be from 10 a.m. until 6 p.m. on June 2.