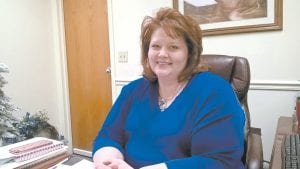 Denise Yonts is the new superintendent of the Letcher County School System. She replaces Tony Sergent, who retired after nearly 4-1/2 years on the job. (Photo by Sam Adams)

If the new superintendent of schools for Letcher County gets her way, every student who is graduated from Letcher County Central High School will be certified as a career or college ready.

Denise Yonts took over as Superintendent earlier this month. She replaces Superintendent Tony Sergent, who retired in October after about four and a half years in the position and more than 30 years in district.

“My number one goal is to continue the good things we’re already doing,” Yonts said.

She said Letcher County Central High School has a 97.2 percent graduation rate, and of those 78 percent were considered college or career ready last year.

“We want to jump that to 100 percent in five years,” Yonts said.

Yonts began her career as a special needs instructional assistant at West Whitesburg Elementary before being hired as an English teacher at Whitesburg High School. She had been a classroom teacher for six years when she was promoted to assistant principal at WHS, then to principal during the last year that school was open before consolidation. When Letcher County Central High School opened temporarily in the old WHS building, Yonts was one of two assistant principals, a position she remained in when the new LCCHS building opened in the spring of 2006.

She was appointed as the district’s director of curriculum and instruction in July 2013 after Sergent became superintendent. The Letcher County Board of Education hired her November 6 to take over as superintendent. Her contract is for the remainder of Sergent’s four-year term, giving her three years and 142 days in the position at a salary of $105,000 a year. Board Chairman Will Smith called the contract “stripped down,” but said it will be reviewed again before its end.

“There’s not a lot of benefits in it,” he said. “Sometime after her first year or two, if she’s doing well, we’ll probably go back and add some things.”

Smith said Yonts was one of eight applicants for the office. Applicants applied through the Kentucky School Boards Association, which then turned the applications over to a screening committee appointed by the board. That committee forwarded six of the eight names, all from within Letcher County, to the board.

“We usually ask for the screening committee to give us the top five candidates, but our policy to interview all Letcher County applicants,” Smith said.

Yonts will face some challenges as the new superintendent because of a decline in county tax assessments. Smith said the assessments were down $48 million again this year, and if the board had approved the “compensating” property tax rate, that which would bring in the same revenue as the prior year, it would have meant an 8-cent tax increase. Instead the board chose to the keep the rate the same.

He said in spite of district test scores are up and the district was able to give teachers a 2-percent pay increase.

“We’ve got probably one of the strongest budgets in eastern Kentucky,” he said. “We’ve watched every penny we got.”

In the past, the district has had to close some schools because of the shrinking budget, but Yonts said “that’s not even on my radar.”

Some have worried about Arlie Boggs Elementary School’s future in particular because it is so small, but Yonts said she would never advocate closing it because of its location on the South side of Pine Mountain, and because of it’s performance.

“Right now, Arlie Boggs is one of our top scoring schools,” she said.

She said there’s also no immediate plan to consolidate middle schools, another solution that has been discussed in the past.

She said the district already has enough debt, and building a new school would certainly create more.

“It would be 10 or 15 years before we could look at a new facility,” Yonts said.

Yonts said she plans to focus her efforts on people, and plans to “put lives first daily.”

“My job and my staff ’s job is to see that the interaction between staff and students is the best it can be no matter what,” Yonts said.