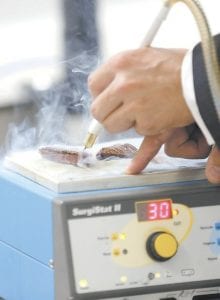 A doctor uses the the experimental knife on a piece of animal muscle during a demonstration in London on July 17. (AP Photo)

Surgeons may have a new way to smoke out cancer.

An experimental surgical knife can help surgeons make sure they’ve removed all the cancerous tissue, doctors say. Surgeons typically use knives that heat tissue as they cut, producing a sharp-smelling smoke. The new knife analyzes the smoke and can instantly signal whether the tissue is cancerous or healthy.

Now surgeons have to send the tissue to a lab and wait for the results.

Dr. Zoltan Takats of Imperial College London suspected the smoke produced during cancer surgery might contain some important cancer clues. So he designed a “smart” knife hooked up to a refrigerator-sized mass spectrometry device on wheels that analyzes the smoke from cauterizing tissue.

The smoke picked up by the smart knife is compared to a library of smoke “signatures” from cancerous and non-cancerous tissues. Information appears on a monitor: green means the tissue is healthy, red means cancerous and yellow means unidentifiable.

To make sure they’ve removed the tumor, surgeons now send samples to a laboratory while the patient remains on the operating table. It can take about 30 minutes to get an answer in the best hospitals, but even then doctors cannot be entirely sure, so they often remove a bit more tissue than they think is strictly necessary.

If some cancerous cells remain, patients may need to have another surgery or undergo chemotherapy or radiation treatment.

“(The new knife) looks fabulous,” said Dr. Emma King, a head and neck cancer surgeon at Cancer Research U.K., who was not connected to the project. The smoke contains brokenup bits of tumor tissue and “it makes sense to look at it more carefully,” she said.

The new knife and its accompanying machines were made for about $380,000, but scientists said the price tag would likely drop if the technology is commercialized.

The most common treatment for cancers involving solid tumors is removing them in surgery. In the U.K., one in five breast cancer patients who have surgery will need further operations to get rid of the tumor entirely.

Scientists tested the new knife at three hospitals between 2010 and 2012. Tissue samples were taken from 302 patients to create a database of which kinds of smoke contained cancers, including those of the brain, breast, colon, liver, lung and stomach.

That was then used to analyze tumors from 91 patients; the smart knife correctly spotted cancer in every case. The study was published in the journal Science Translational Medicine. The research was paid for by groups including Imperial College London and the Hungarian government.

At a demonstration in London on July 17, doctors used the new knife — which resembles a fat white pen — to slice into slabs of pig’s liver. Within minutes, the room was filled with an acrid-smelling smoke comparable to the fumes that would be produced during surgery on a human patient.

Takats said the knife would eventually be submitted for regulatory approval but that more studies were planned. He added the knife could also be used for other things like identifying tissues with bad blood supply and identifying the types of bacteria present.

Some experts said the technology could help eliminate the guesswork for doctors operating on cancer patients. “Brain cancers are notorious for infiltrating into healthy brain tissue beyond what’s visible to the surgeon,” said Dr. Len Lichtenfeld, deputy chief medical officer of the American Cancer Society. “If this can definitively tell doctors whether they’ve removed all the cancerous tissue, it would be very valuable,” he said.

Still, Lichtenfeld said more trials were needed to prove the new knife would actually make a significant difference to patients. Early enthusiasm for new technologies hasn’t always panned out, he said, citing the recent popularity of robotic surgery as an example.

“It expanded very rapidly but is now hitting some bumps along the road,” he said.

Lichtenfeld said it’s unclear whether more widespread use of the smart knife will actually help patients live longer and said studies should also look into whether the tool cuts down on patient’s surgery times, their blood loss and rate of wound infections.

“This is a fascinating science and we need to adopt any technology that works to save patients,” Lichtenfeld said. “But first we have to be sure that it works.”