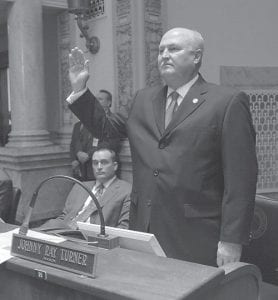 Senator Johnny Ray Turner, D-Drift, was sworn in Tuesday during the opening of the 2009 Kentucky General Assembly Legislative Session. Turner, who represents all of Letcher County, was re-elected for his third term in the November election. He also was re-elected Caucus Chair by his colleagues in the Senate Democratic Caucus. Senator Turner represents the 29th District, which also includes Breathitt, Floyd, and Knott counties. Administering the oath of office was Chief Justice John D. Minton.