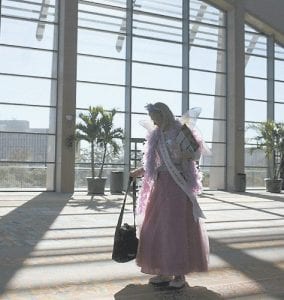 Good Health Fairy and breast cancer survivor Rene Bowditch, of Virginia, promoted breast cancer awareness, her organization, Beyond Boobs, and their calendar, “A Calendar to Live By” at the Henry B. Gonzalez in San Antonio, Texas. (AP Photo)

A new test to predict an average woman’s odds of getting breast cancer works better than a method doctors have relied on for decades, researchers have reported.

The test is the first to combine dozens of genes and personal factors like age and childbearing to gauge risk in women who don’t have a strong family history of the disease. They account for three-fourths of all cases.

In a California study to check its validity, the test correctly classified 50 percent more women with breast cancer as high risk than the current method did, and properly scored others lower. Results were given at a cancer conference in Texas.

But cancer specialists said that even though this test and several others claiming to predict risk are available, more research is needed to prove their worth.

“The market is being flooded with all these tests making all these claims,” said Dr. Len Lichtenfeld, deputy chief medical officer for the American Cancer Society.

“There’s no ‘Consumer Reports’ of genetic testing” to rate their accuracy and usefulness, he said.

Women and doctors have long wished for a simple test that could reveal risk beyond the two BRCA genes, which tend to cause cancer at early ages but account for only a few percent of all cases. In the last year, four companies started selling broader multi-gene tests, but their value is widely disputed.

Women thought to be at high risk can get more frequent mammograms or MRI scans to check for breast cancer, or consider hormone-blocking drugs like tamoxifen. But even some advocates for better prevention approaches don’t think gene tests are a good idea until more is known about the best treatment options.

“Are we going to give everyone chemotherapy or chop off everyone’s breasts?” asked Barbara Brenner, head of the advocacy group Breast Cancer Action.

“It’s terrifying people” to allow these tests to be sold without more information, she said.

The company that makes the new OncoVue test — Oklahoma City-based InterGenetics Inc. — aims to duck criticism by offering it only through doctors rather than directly to consumers, and validating it in population studies like the one reported Dec. 12.

The $397 test looks for 22 single-letter variations in 19 genes that have been linked to breast cancer. The test is offered through 33 sites around America, said Eldon Jupe, a geneticist and co-founder of the company.

Women fill out a medical questionnaire and use a mouthwash that releases cheek cells that are spit into a test tube and analyzed. A computer model weighs these factors to score cancer risk.

The test incorporates parts of the risk assessment tool that scientists and doctors use now — the Gail model, named after the National Cancer Institute biostatistician who developed it 20 years ago, Dr. Mitchell Gail. The factors include age, how many close relatives have had breast cancer, and when a woman started having periods or first gave birth.

It’s a fairly crude model and studies have shown its many limitations, yet doctors and researchers rely on it so heavily that the Internet site for it is accessed 25,000 times a month, said Dr. Lynn Hartmann of the Mayo Clinic in Rochester, Minnesota.

“Better risk prediction is a huge need,” she said.

The new study’s leader, Dr. Kathie Dalessandri, a scientist at the University of California at San Francisco, wanted to see if OncoVue could outperform the Gail model in predicting risk in women in nearby Marin County, where breast cancer rates have been very high.

“It’s been a puzzle for some time as to why,” and BRCA genes do not explain it, Dalessandri said.

She did a previous study of 169 Marin County women diagnosed with breast cancer in the late 1990s and 177 women of similar age, weight and other factors identified through random phone calls. The Gail model was of little help sorting out why some had cancer and others did not.

For the new study, she used OncoVue on stored samples from that trial. OncoVue was two and a half times better at separating high and low risk women than the Gail model had been.

OncoVue put at high risk 19 more women who had breast cancer than Gail had — a 51 percent improvement, she said.

“The fact that they’ve been responsible in not doing directto consumer marketing has been encouraging,” he said of the test’s makers. “I give them a great deal of credit for that.”

The Food and Drug Administration has not approved gene tests and is considering guidelines for doing so. In the meantime, it has allowed many to be sold under existing rules that govern lab testing.

Some insurers cover some tests under certain circumstances.

The San Antonio Breast Cancer Symposium is sponsored by the American Association for Cancer Research and two universities.