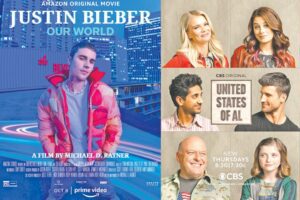 It’s a funny quirk that one of the highest-grossing documentaries ever belongs to Justin Bieber. “Justin Bieber: Never Say Never” made more than $73 million at the box office in 2011, a non-fiction total bested only by “Fahrenheit 9/11” and “March of the Penguins.” A lot has changed in the intervening decade for both Bieber and the movies. “Justin Bieber: Our World,” which debuts Friday on Amazon Prime, tracks some of those changes in the now 27-year-old pop star while focusing on his preparations for his first full concert in three years — a New Year’s Eve 2020 show in Beverly Hills.

— Bieber isn’t the only pop star trotting out a new documentary this week. The concert film “Madonna: Madame X” premieres Friday on Paramount+, showcasing the 63-year-old singer’s latest persona, an international secret agent around whom she framed her 2019 album of the same name. The film chronicles her “Madame X” album tour, in which Madonna played a string of smaller, more intimate venues for the first time in decades.

— Country group Old Dominion made their mark as excellent songwriters and energetic performers with multiple hits for other artists, as well as their own chart-topping singles. The five-piece band, led by vocalist Matthew Ramsey, wrote all the songs together for their new album “Time, Tequila and Therapy,” out Friday, during a weeklong trip to Asheville, North Carolina. While recording in the Blue Ridge Mountains town, the group discovered that legendary soul singer Gladys Knight also lived in town. So naturally, they recruited her to sing with them on “The Lonely Side of Town,” melding the group’s backing harmonies with Knight’s smooth vocals.

— CBS’ “United States of Al” it tackling a somber story, one it’s uniquely positioned to do. The buddy comedy centers on the friendship of Riley, a combat veteran who fought in the Mideast, and Awalmir, aka Al, the Afghanistan translator he helped bring to the U.S. In the second season debut airing Thursday (8:31 p.m. EDT), Al and Riley are scrambling to get Al’s sister out of Kabul after the Afghanistan capital’s fall. CBS said the episode was inspired by the experiences of the show’s veterans and Afghan writers who teamed to evacuate family members. The episode then streams Friday on Paramount+.

— Showtime’s docuseries “Buried” examines the fallout from a 1969 California murder case that was prosecuted based on a claim of recalled memory. Eileen Franklin alleged that her father had raped and killed a childhood friend, Susan Nason, nearly two decades before, when Susan was 8 years old. The four-part documentary, debuting 9 p.m. EDT Sunday, recounts the debate the case provoked in the legal and mental health fields about the legitimacy of such memories.