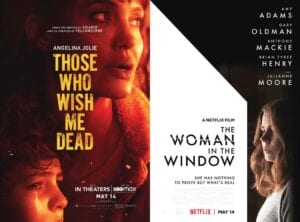 Here’s a collection curated by The Associated Press’ entertainment journalists of what’s arriving on TV, streaming services, and music platforms this week.

— After a bit of a hiatus from action films, Angelina Jolie is back in the thriller “Those Who Wish Me Dead” as a Montana smoke jumper who comes across a 12-year-old boy (Finn Little) on the run and in need of help. Director Taylor Sheridan, the Oscar-nominated writer of “Hell or High Water” and co-creator of the TV series “Yellowstone,” told the AP that the film was “very on-brand” for him and his proclivity for stories about vengeance and the American West. Available Friday on HBO Max for 31 days, “Those Who Wish Me Dead” co-stars Nicholas Hoult, Jon Bernthal, and Tyler Perry.

— This week also sees the long-awaited release of director Joe Wright’s “The Woman in the Window” adaptation, starring Amy Adams as an agoraphobic psychologist who becomes obsessed with solving a crime she sees from her window. It’s a film that has everything going for it in terms of pedigree. Tracy Letts wrote the adaptation of A.J. Finn’s bestseller and it co-stars Gary Oldman, Brian Tyree Henry, Julianne Moore, Anthony Mackie, and Jennifer Jason Leigh. But it’s also seen several setbacks, with delays due to bad test screenings, reediting and the pandemic before the studio eventually sold it to Netflix, where it debuts Friday. Has it been salvaged? Will it be a disaster? Wright has had more triumphs than missteps over the years, so regardless it’s worth a shot and it won’t even cost the price of a movie ticket to try.

— Or over on Amazon Prime and Hulu starting Wednesday, you can catch up with “Saint Maud,” Rose Glass’s haunting debut about a pious nurse (Morfydd Clark) who has decided she must save the soul of one of her patients (Jennifer Ehle). I may have been a little less zealous about the film than many of my peers, but even so it’s an accomplished first film and there are some chilling images and visionary sequences that’ll stick with you long after.

— The Black Keys are honoring the Mississippi hill country blues standards they loved as teens before becoming a band. Dan Auerbach and Patrick Carney are releasing the 11-track covers album, “Delta Kream,” on Friday. It was recorded at Auerbach’s Easy Eye Sound studio in Nashville and includes their versions of “Crawling Kingsnake” and “Poor Boy a Long Way from Home,” among others.

— St. Vincent is returning Friday with her new album, which was produced by Jack Antonoff. The pair worked together on 2017’s “MassEducation,” winning the best rock song Grammy for the title track. They reunite on the 70s-influenced “Daddy’s Home,” which was inspired by St. Vincent’s father’s release from prison in 2019. The album includes the singles “Pay Your Way in Pain” and “The Melting of the Sun.”

— Get ready for Alan Jackson’s new album, packed with 21 songs. The country icon will release “Where Have You Gone” on Friday. The album includes the tracks “Way Down in My Whiskey,” “Things That Matter,” “Where Have You Gone” and “You’ll Always Be My Baby (Written for Daughters’ Weddings),” a song Jackson wrote for his daughter’s 2017 wedding but admitted “it was so hard to do.” The tune is dedicated to his three daughters – Mattie, Ali, and Dani.

— Now’s your chance to catch up with FX’s dramedy “Breeders,” before the season wraps with episodes airing on Monday and May 17 (10 p.m. EST). Paul and Ally ( Martin Freeman, Daisy Haggard), first introduced as the exhausted parents of pint-size kids in season one, have become the overwhelmed parents of a tween and teen, with a turning point in store for Paul and 13-year-old Luke (Alex Eastwood). As creator Simon Blackwell explains, the season’s story arc was built around a father-son scene in the closing minutes of the penultimate episode — what Blackwell describes as “a shocking moment that redefines their entire relationship in a second.”

— Vanessa Williams hosts PBS’ “Great Performances: The Arts Interrupted,” part of the #PBSForTheArts initiative honoring the “resiliency of the arts in America” during the pandemic and amid the country’s gradual reopening.

The special includes survival stories from arts organizations across America, examples of innovative performances, and an exploration of how COVID 19 and the Black Lives Matter movement have affected emerging artists. Performances by Renee Fleming; Yo-Yo Ma; Ballet X in Philadelphia, and Broadway’s “Moulin Rouge” are featured on the program debuting Friday on public TV stations (check local listings for time) and at the PBS site and on the PBS Video app.

— Mitzi Gaynor’s verve brightened “South Pacific” and other 1950s movies that came at the tail end of Hollywood’s golden age of musicals. Gaynor then transferred her song-and-dance talent and charisma to the small screen, in a series of Emmy-winning specials in the 1960s and ‘70s. Eight remastered programs and a 2008 documentary about the shows will make their streaming debut Friday on services including Amazon, Pluto, Tubi, and Crackle. The star, costumed to the hilt by designer Bob Mackie, welcomed guests including Carl Reiner, Suzanne Pleshette, and Bob Hope. Gaynor, who turns 90 on Sept. 4, will mark the occasion with a new CD and digital release of music from the specials.