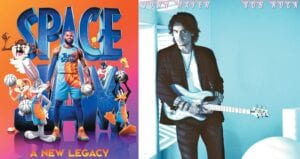 — LeBron James leads the Tunes against the Goons in “Space Jam: A New Legacy,” a sequel to the 1996 movie that had Michael Jordan headlining with Bugs Bunny. Director Malcolm D. Lee didn’t necessarily feel beholden to that first movie though. “I didn’t feel like, ‘Oh, I have to pay homage to that movie.’” It was more about the long legacy of the Looney Tunes more so than that particular film,” he told the AP earlier this year. It’ll be available on HBO Max free for subscribers for 31 days starting Friday, as well as in theaters. Lee said it was the “epitome of a popcorn movie” and even got the stamp of approval from what he says is the toughest audience of all: His 12-year-old son.

— Netflix is closing out its ambitious “Fear Street” trilogy this Friday with the premiere of “Fear Street: 1666” which traces the curse of Shadyside, Ohio back to witch trials. If you’re just hearing about the series now, don’t worry, you’re not far behind. The first two, set around supernatural events in Shadyside in 1994 and 1978, only just debuted over the past two weeks. Janiak told the AP that the series doesn’t necessarily need to be “binged,” but that rewatches will reveal some fun Easter eggs.

— John Mayer returns with his first album since 2017’s “The Search For Everything.” The new one is cheekily titled “Sob Rock” and the singer-songwriter-guitarist explores the often maligned genre of soft rock. “Last Train Home,” the superb first single, features Maren Morris on background vocals and has Mayer wielding his axe like Eric Clapton. Don Was helped produce the album and the cover has Mayer in a very ‘80s pose, a little “Miami Vice” mixed with Richard Marx.

— For wrestling fans, the start of normal life after pandemic lockdowns arrives this week with WWE’s return to live events with in-person audiences. A 25-city summer tour starts in Texas with Houston’s “SmackDown,” airing on Fox at 8 p.m. EDT Friday. Next up is “Money in the Bank” in Fort Worth (8 p.m. EDT Sunday on the Peacock streaming service), and “Raw” in Dallas (8 p.m. EDT, USA). One big announced match for Sunday: Bobby Lashley facing Kofi Kingston for the WWE Championship.