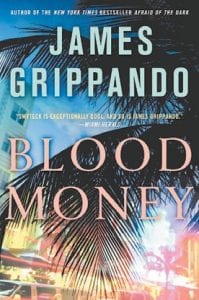 According to the general public and the media, Swyteck’s client Sydney Bennett is guilty of murdering her 2-year-old daughter. Everyone but the court has already convicted her, and when the verdict is not guilty, hysteria ensues. Swyteck receives death threats and is accused of taking blood money, but his main concern involves getting his client out of prison safely. On the night of Bennett’s release, a woman who looks like her is assaulted and ends up in a coma. The media blames Swyteck, but the young woman’s parents want answers and they go to Swyteck for help.

The mystery itself is a bit obvious, but Grippando’s examination of corporate media and the power of the court of public opinion elevate “Blood Money.” Swyteck has to work within the law to save his client, while dodging blows from a zealous TV reporter and countering the spreading lies in media reports. Every step he takes is scrutinized and examined in the world of instant news. Swyteck’s career and his client’s life hang in the balance.

The courtroom antics are fun and will remind readers of the best of Perry Mason. Grippando has been at the top of the legal-thriller ladder for some time, and “Blood Money” will enhance his reputation and readership.