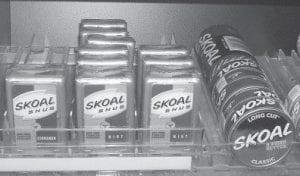 They’re discreet, flavorful and come in cute tin boxes with names like “frost” and “spice.” And the folks who created Joe Camel are hoping Camel Snus will become a hit with tobacco lovers tired of being forced outside for a smoke.

But convincing health officials and smokers like Ethan Flint that they’re worth a try may take some work.

Snus — Swedish for tobacco, rhymes with “noose” — is a tiny, tea bag-like pouch of steam-pasteurized, smokeless tobacco to tuck between the cheek and gum. Aromatic to the user and undetectable to anyone else, it promises a hit of nicotine without the messy spitting associated with chewing tobacco. Just swallow the juice.

“I think I’d rather throw up in my mouth,” says Flint, an 18- year-old West Virginia University student, emerging from a convenience store with a pack of Winstons and a coupon for free Camel Snus. “I’d rather not swallow anything like that.”

Reynolds America Inc., the nation’s No. 2 tobacco company, can also expect resistance from the public health community. Experts wonder whether snus will help wean people off cigarettes and snuff, or just foster a second addiction. While snus has been around, it hasn’t been prominent in this country.

“I think we’re all holding our breath in terms of what’s going to be coming down the pike,” says Dorothy Hatsukami, director of the Tobacco Use Research Center at the University of Minnesota. “There’s not much known about these products — what’s in these products, how they’re going to be used, who’s going to be using them and what the effects of that use will be. … Will it create more harm or less harm?”

Reynolds is confident its new product will find a following. It launched Camel Snus in Austin, Texas, and Portland, Ore., in 2006, and has since expanded to test markets nationwide, with customers in nearly every state. Early next year, it’s taking snus national with a marketing blitz that spokesman David Howard says will include direct mail, print and Web advertising, and point-of-sale promotions.

Popular for decades in Sweden, where it was invented, snus has been banned in every other European Union nation since 2004 over concerns about carcinogens.

But smokeless tobacco is legal in the U.S., where there are two schools of thought: Some researchers suggest the lower risk of lung cancer makes snus an attractive alternative to smoking, while others fear an increase in problems including mouth lesions or pancreatic cancer.

The American Cancer Society supports any tool that helps smokers quit. “But we don’t have any good scientific evidence that snus is one of those tools,” said Tom Glynn, director of cancer science and trends.

“If all smokers switched to snus tomorrow, in a few years we’d certainly see less heart disease, less lung disease and fewer cancers,” he said. “But there’s no evidence that smokers can switch and stay switched.”

Prevention officials already have their work cut out for them in West Virginia, which has the third-highest adult smoking rate in the U.S. at nearly 27 percent and the highest rate of “spit” or chewing tobacco use at 16 percent.

“The industry is brilliant, and whatever they want to outspend us by — $1 million, $10 million, $100 million — they can do it,” said Bruce Adkins of the state Division of Tobacco Prevention.

To sustain its current level of sales and combat tobacco-related deaths, Adkins says, the industry must find 4,000 “replacement smokers” a year in West Virginia alone.

Danny Wolfe, a 38-year-old computer draftsman, gave up regular spit tobacco and has been using Copenhagen tobacco pouches for several years. He spits out the juice; it gives him heartburn.

“It’s the same product, just packaged differently. It doesn’t get in your teeth. It doesn’t have the mess,” says Wolfe, who was sick of smoking outside his Morgantown office. “You’re not quitting anything. You’re replacing.”

Snus is also popular with hunters, who try to avoid scent detection by their prey, and with coal miners, who work in underground mines where the smallest spark can trigger an explosion.

“I find that more rednecks use it,” Wolfe says. “I won’t lie to you about that.”

Reynolds is even developing dissolvable tobacco strips, orbs and sticks that it will start testmarketing early next year in Portland, Indianapolis and Columbus, Ohio.

Though “very appealing” in form and flavor, Hatsukami also finds those products worrisome.

Researchers have little information about nicotine absorption and toxicity for any of the new products, she says, and there’s too little data on snus to make per-dose comparisons to cigarettes or spit tobacco.

“It’s not like chewing gum,” warns Robert Anderson, deputy director of West Virginia University’s Prevention Research Center. “This product is not a safe alternative to cigarettes.”

And because its use is easy to conceal, WVU researcher Cindy Tworek worries children could suck on the pouches in front of oblivious parents or teachers. The brightly colored tins seem designed to attract both female and young users, she says.