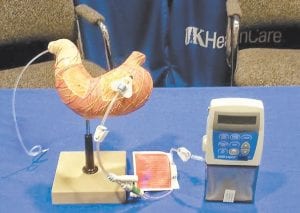 The new, trademarked treatment, Duopa, provides a continuous 16 hour dose of levodopa, which is the “gold standard” drug to treat Parkinson’s disease, using a special gel preparation, which is put directly into the small intestine by a portable infusion pump.

The University of Kentucky has unveiled a new treatment for people with advanced symptoms of Parkinson’s disease and invited one of the first patients to participate in the clinical trial to share how this treatment has improved his function and productivity.

The new, trademarked, treatment, Duopa, provides a continuous 16 hour dose of levodopa, which is the “gold standard” drug to treat Parkinson’s disease, using a special gel preparation, is put directly into the small intestine by a portable infusion pump. It was developed by AbbVie Inc. and approved by the U.S. Food and Drug Administration in January.

“This treatment extends our ability to manage the signs and symptoms” of Parkinson’s, said Dr. John Slevin, professor of neurology and vice chair of research at UK’s Kentucky Neuroscience Institute. Slevin also worked with international investigators to test this treatment and is the lead author of the study, which is published in the Journal of Parkinson’s Disease.

Parkinson’s is a chronic and progressive disease of the nervous system that is characterized by motor symptoms such as tremors, slowness, stiffness and impaired balance and coordination. It can also cause non-motor symptoms such as sensory deficits, cognitive difficulties and sleep problems.

The cause of Parkinson’s is unknown and there is no cure, but it is known that the disease process involves the death of nerve cells in the brain that produce dopa- mine, a chemical that sends messages to the part of the brain that controls movement and coordination.

Slevin said that there are many challenges in treating the symptoms of Parkinson’s as it progresses. In addition to the continued loss of nerves in the brain, he said levodopa looses its effectiveness over time and the dose level begins to fluctuate. He also noted that over time patients will get a side-effect from the drug called dyskinesia, or involuntary muscle movement.

Another challenge, which he said prompted the development of this treatment, is that the muscles that control digestion are also affected by the disease, which creates an inconsistency in the blood level of levadopa that can be turned into dopamine in the brain.

This new treatment alleviates this challenge by placing the drug directly where it is absorbed in the intestine, allowing “the blood level, and thereby brain level (to remain) constant and that reduces the probability of having intermittent dyskinesia,” Slevin said.

“ We are extremely pleased with the results. Patients with advanced Parkinson’s disease treated via this new method demonstrated marked improvement in symptom fluxuations and reduced dyskinesia,” Slevin added.

Marion Cox, a 70-yearold Georgetown farmer and former real estate developer, who has had Parkinson’s for 16 years, participated in the clinical trial for three years and said that this treatment has given him a “new lease on life.”

“It was the best thing that ever happened to me. The improvements have been that great,” Cox said. Later saying, “I can do anything I want to do. I can horseback ride. I’ve got a team of horses that I drive. I’ve got lots of farm equipment, excavating equipment that I drive. Before I went on the trial I was still doing those things, but unbelievably slow.”

Cox will be the first patient in Kentucky to receive Duopa after FDA approval.

Becky Cox, Marion’s wife days, those who received both treatments had less disability and had a functional independence rate of 60 percent, compared to 35.5 percent of those who received only tPA. Also, patients who received thrombectomy had better blood flow rates in the brain.

“Ethically, we can’t deny patients a treatment when we have such strong evidence it’s better for them,” Lopes said. Now thrombectomy is a standard treatment for severe strokes at Rush and some other locations. The study is published in the online edition of the New England Journal of Medicine.