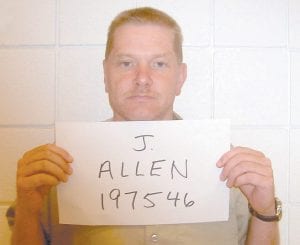 Jeffery Allen, 45, of Sandlick, has been an inmate in the Eastern Correction Complex at West Liberty since he was convicted in February 2006 of wanton murder in the death of foster child Dakota Yonts, who was 2-1/2 when he died in March 2003. Allen has been granted a new trial.

The Kentucky Supreme Court is standing by its divided decision to order a new trial for a Letcher County man who was sentenced to 50 years in prison in 2006 after a jury found him guilty of murdering a 2- 1/2 year old foster child who was in his care.

An order granting a new trial for Jeffrey Allen, of Sandlick, became official on January 22 when the Supreme Court denied Kentucky Attorney General Jack Conway’s petition asking it to reconsider its earlier opinion which reversed one part of Allen’s conviction, affirmed two other parts, and still ordered the case sent back to Letcher Circuit Court for retrial.

The Supreme Court handed down its initial ruling ordering the new trial in June. Four justices voted in support of the ruling, holding that jurors may have become prejudiced against Allen after they were improperly allowed to hear recordings of two non-emergency telephone calls to E-911 officials in Hazard. Three justices, including Will T. Scott of Pikeville, joined in a dissenting opinion which said that Allen’s conviction should stand because the admission of the 911 tapes was “harmless” error.

The case against Jeffrey Allen began on the night of March 27, 2003, when Dakota Yonts, appearing frail and badly bruised, was pronounced dead at the Whitesburg hospital. Dakota had been taken to the hospital for treatment after Allen’s wife, Eugenia, returned from a shopping trip in Hazard to find her husband sitting on a couch holding the baby, who was not breathing.

During Allen’s long trial in Whitesburg, prosecutors sought to prove — and jurors ultimately agreed — that Dakota, a child small for his age who had been diagnosed with failure to thrive, died of injuries he suffered after Allen used physical force while attempting to get Dakota to be quiet so that Allen could enjoy a hotly-contested NCAA Tournament basketball game between the Kentucky Wildcats and the University of Wisconsin.

Emergency medical workers who tried to revive Dakota, including nurses at the Whitesburg hospital, said the injuries that killed the baby could not have been caused by Dakota’s young siblings or another foster child, as Allen had claimed. State medical examiners also testified that the injuries which killed Dakota were too severe to have been caused by a child.

In granting Allen a new trial, the Supreme Court held that Letcher Circuit Judge Sam Wright erred when he allowed into evidence the recordings of two phone calls made to E-911 officials after Dakota had already been pronounced dead at the hospital.

In one of the calls, a nurse who tried to revive the baby could be heard telling the 911 operator that Allen’s story about what happened to Dakota did not “fit,” and that she thought the fatal injuries had to have been caused by an adult. The other call was made by an unidentified City of Whitesburg police officer who told the 911 operator that “it was the foster parents” who caused Dakota’s death and asked that a Kentucky State Police detective be sent to open a murder investigation.

“Here, the trial court failed to recognize when the calls to 911 ceased to address an ongoing emergency situation, and instead became testimonial statements,” the court wrote in its majority opinion. “The phone call by the police officer clearly goes beyond the intent of what the 911 line is to be used for, namely for reporting emergency situations, and segues into testimonial speculation concerning culpability.”

The call from the nurse, the majority opinion added, “was hearsay (that) did not satisfy any of the hearsay exceptions.”

A dissenting opinion authored by Justice Scott said “it stretches reason to suggest that admitting the tapes of the 911 phone calls in question constitutes reversible error. Given the … damning nature of the other evidence presented during the course of this lengthy trial, any resulting error was harmless.”

Scott said it was Allen’s “own words” and not the tapes of the two 911 calls that created the “most damning evidence” against him.

“(Allen) changed his story multiple times and gave conflicting accounts concerning who or what caused Dakota’s death,” Scott wrote. “(Allen) first blamed Dakota’s death on J., indicating he saw her sitting on top of him with her knees on his chest. Then, (Allen) blamed Dakota’s death on T., alleging that he jumped on him wearing cowboy boots. (Allen) maintained that it was one of the foster children under his care who caused the injuries that led to Dakota’s death despite the testimony of medical experts indicating that such small children could not inflict the types of fatal injuries which Dakota suffered.”

The Supreme Court held that Judge Wright did act properly when he refused to permit Allen’s attorneys to include “hearsay testimony” from two women who were prepared to testify that they heard Dakota’s biological mother tell Jeffrey and Eugenia Allen that she knew they could not have done anything to hurt Dakota, and that she had told the Allens that she had to pull one of the children off Dakota herself while visiting with him the week before.

The court said it was visiting the hearsay testimony now in the event the question “may arise on retrial.”

“We find that the trial court was proper in its determination that the hearsay statement was not admissible,” the justices wrote. “There was no error.”

The justices also ruled that Judge Wright acted properly when he refused to allow into evidence certain “rebuttal testimony” attorneys had planned on Allen’s behalf.