New trucks from Ford, Chrysler up the ante 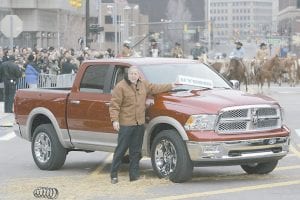 NEW RAM UNVEILED – Jim Press, vice chairman and president of Chrysler, was photographed showing off the 2009 Dodge Ram at the North American International Auto Show in Detroit as cattle were being driven down a Detroit street (AP Photo)

The hyper-competitive U.S. pickup truck market is getting even more hype with new trucks from Ford and Chrysler that look nicer, perform better and are packed with more features than their predecessors.

Ford Motor Co., whose F-series pickups are the top-selling vehicles in the nation, unveiled a new F-150 this week at the North American International Auto Show in Detroit. The same went for Chrysler LLC, which ran cattle down streets near the show as it pulled the tarp off a completely revamped Dodge Ram.

Both will debut as 2009 models sometime in the fall. Each was designed after extensive research to fix flaws in the old models, make them more efficient and build in features that people may not even know they wanted.

For the Ram, that means an industry-first lockable storage container built into the bed rails and Dodge’s first four-door crew cab, which will make Dodge a player in the fastest-growing part of the market. The F-150 has stowable steps built into the side and tailgate and a capless fuel system that reduces emissions. 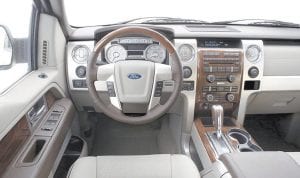 FORD’S NEW INTERIOR – The hyper-competitive U.S. pickup truck market is getting even more hype with new trucks from Ford and Chrysler that look nicer, perform better and are packed with more features than their predecessors. Ford, Motor Co., whose Fseries pickups are the top-selling vehicles in the nation, unveiled the new F-150 this week at the North American International Auto Show in Detroit. (AP Photo/Ford Motor Co.)

Both automakers hope the improvements will stimulate pickup sales, which took a dive in 2007 as the housing market crumbled and construction sagged. U.S. pickup sales were down 6 percent, compared to a 3 percent drop in vehicle sales industrywide. Consumers bought 2.2 million full-size pickups, down from a peak of 2.5 million in 2004 when the last F-150 was introduced.

This year also will be tough for pickups, said Erich Merkle, vice president of auto industry forecasting for the consulting firm IRN Inc. in Grand Rapids.

“We don’t really foresee a bottom in home construction until very late this year, and even when we get to a bottom, we’re not going to see a slingshot back up,” he said. “We could see a modest uptick in 2009, but nothing that’s going to re-ignite the pickup segment.”

Merkle said the down market and the growing number of competitors – Toyota Motor Corp.’s new Tundra hit the market last year – could lead to a serious pricing war. Toyota and General Motors Corp. were already piling nearly $3,000 in incentives per vehicle on their new full-size trucks in 2007, according to the auto research site Edmunds.com.

Ford and Chrysler aren’t yet revealing pricing on their new pickups, but they’re counting on them to sell regardless of economic and pricing pressures.

“The only remedy to any of that is good product,” said Ralph Gilles, Chrysler’s chief designer on the Ram. “You’re still going to sell an amount of trucks in the marketplace, so hopefully you can take sales away from somebody else. That’s the objective, right?”

Gilles’ involvement is a measure of the Ram’s importance to Chrysler. He was the principal designer of the blockbuster hit 300C sedan and was pulled off Chrysler’s new minivans to work on the truck.

“It’s daunting to have the bestselling vehicle in your company to work on, but at the same time it’s invigorating. It’s what you live for as a designer,” Gilles said.

At Ford, where the F-series has been the best-selling truck in the U.S. for 31 years, President of the Americas Mark Fields briefly paused work on it two years ago to make sure it would stay ahead of the competition.

No detail was overlooked. Ford considered around 200 designs for the new F-150 badge, according to Patrick Schiavone, the designer who led the F-150 redesign. All told, more than 1,000 Ford engineers, designers and researchers worked on developing the truck.

“When you’re the leader, you’ve got a big target on your back and there’s a big responsibility for that because everybody’s gunning for you,” said Fields.

Gilles, too, said he helped persuade Chrysler executives to spend more than they usually would on a redesign.

Fuel economy was at the top of the list for the trucks’ engineers. Ford added more fuel-efficient six-speed transmissions on some models, and said its three V-8 engine choices improve fuel economy by 1 mile per gallon across the F-150 lineup, which has 35 configurations. Engineers took out 25 to 50 pounds by using lighter-weight high-strength steel, and they added a wing to the grooved tailgate to improve aerodynamics. Ford plans to add diesel and direct injection gas engines as additional fuel-saving options in 2010.

But Gilles said changes to the Ram’s interior are the big story. Everything, from the heated front and back seats to the heated steering wheel to the instrument dials, was designed to be soft to the touch.

“Some of the stuff we’re going to show in the truck are unbelievable world-class fit and finishes,” he said.

Schiavone said he wanted to dispel a notion that the Ford brand can’t be luxurious.

“I don’t know where it came from that trucks can’t be fashionable,” he said. “They’re uniquely American, but they can be extremely tasteful.”