7.1 mile project continues between Eolia, Partridge; work is ahead of schedule 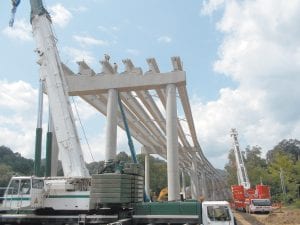 Photos above and below show portions of the 1,900-foot bridge that spans the Poor Fork of the Cumberland River three times as well as Colliers Creek. (Eagle photos)

Work is continuing on a project to make about seven miles of US 119 safer between Partridge and Oven Fork.

Work began in February to build a bridge that is approximately 1,900 feet long.

“It spans across Cumberland River three times and over Collier’s Creek,” said Chuck Childers, project manager with Kentucky Transportation Cabinet District 12. “It’s quite a long bridge for this area.”

Because of environmental regulations the Poor Fork of the Cumberland River cannot be affected. The bridge also crosses a CSX railroad line that is no longer in use.

The valley floor construction from the Partridge area to the foot of Pine Mountain at Eolia includes five different phases.

“It’s basically rebuilding a new alignment of US 119,” said Childers.

The first section costs almost $7 million and will tie in with the new bridge near the Harlan County line. Work on the first portion started in 2008 and has since been completed. 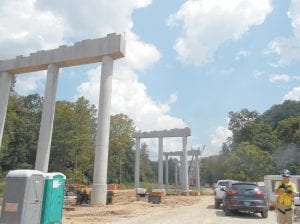 The second section costs $24 million, including the $9 million bridge at Collier’s Creek, and is to be completed by fall of 2015. Central Bridge of Lexington is the contractor.

Construction of the third section began in April and is expected to be completed by fall of 2016. This $19 million project, which includes 1.8 miles of smaller bridges and roads, reaches to Joe Day Branch behind the Stables at Creekside Glenn in Partridge.

The fourth section will be ready for bids in December and consists of 1.6 miles of roadway from Joe Day Branch to Brown Branch.

The fifth section is still under design and includes road construction from Brown Branch to near Eolia.

Childers said if construction continues at the current pace, all work will be completed ahead of the projected dates.

“We have another winter to go through and it could change,” he said.

Because construction is taking place away from the existing roadway, major roadblocks have been prevented.

“Occasionally we’ll have to stop traffic for blasting,” said Childers.

However, workers do have to pay attention to bears and other wildlife they encounter in the area.

“(Bears) aren’t in the way, but don’t seem to shy away from the equipment,” said Childers. “They (workers) have seen a lot of wildlife.”

US 119 between Eolia and Partridge is a very narrow road that currently follows a path around many steep curves.

Once completed, the new sections will consist of 12-foot lanes that provide better sight distance, Childers said. Motorists should be able to travel the new road safely at 55 miles per hour.

“You won’t save a tremendous amount of time, but it will be safer,” said Childers.

The entire project won’t be completed for another four or five years.

“Be patient with us,” said Childers.