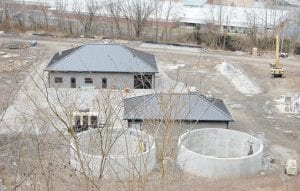 PLANT OPERATIONAL — The opening of the Whitesburg Wastewater Plant, located below Pine Mountain Lumber Company in West Whitesburg, marks the culmination of more than five years of planning, gathering funds, and construction of a $6 million facility that became necessary when state officials obtained a court order against the City of Whitesburg for polluting the Kentucky River with discharge from its old plant.

After more than five years and millions of dollars, the new Whitesburg Wastewater Plant is on line and treating sewage.

Jeff Kilgore of Veolia Water, the company which manages the city’s water and sewer systems, told the Whitesburg City Council that Smith Contractors, the company that won the bid for constructing the $6 million plus plant, conducted a system-wide test earlier this month and found no problems with the new plant, except for a minor glitch when it was discovered that a valve hadn’t been installed. After that was taken care of, Kilgore said, the plant operated perfectly and Veolia is routing solid waste away from the old plant into the new one.

The opening of the plant, located below Pine Mountain Lumber Company in West Whitesburg, marks the culmination of more than five years of planning, gathering funds, and construction of a facility that became necessary when state officials obtained a court order against the City of Whitesburg for polluting the Kentucky River with discharge from its old plant. The new plant not only takes care of the problems indicated in the order, but also fits in with the Letcher County Fiscal Court’s plans to expand water and sewer lines throughout the county.

Kilgore told the council that plant security remains an issue and as soon as weather permits, security fences will be installed. He also told the council the city can save a large sum of money if a property owner can be found who is willing to allow the city to dump the treated sludge from solid waste on his or her land instead of hauling it to a landfill. Kilgore said farmers sometimes use the byproduct as fertilizer. He said it improves the quality of the topsoil and that the dumping is strictly regulated.

In other business, the council heard from Jim Walker of Nesbitt Engineering, who said a pedestrian bridge planned for downtown Whitesburg can be in place and operational before July 4. The council approved the plans for the bridge, which will span the North Fork of the Kentucky River and connect two city parking lots. Mayor James Wiley Craft said the bridge will also be wired for the city’s sound system.

The council also heard a request from Dry Fork residents Nancy and Dickey Banks, who operate a business in the Dry Fork area and want their property annexed into the city so they can connect to city water and sewage. The Bankses said they have discussed the matter with most other business owners along KY 15 at Dry Fork and they are supportive of annexation as well.

Craft said the city has already planned to enlarge the lines running past the Parkway Motel to allow for a tiein from the Dry Fork area, but the eventual sewer hook-ups would have to be done as part of Letcher County Water and Sewer District. He said he would be happy to look at annexation and added that he believes it is important for people who want city services to become part of the city.

“My philosophy is if we’re going to furnish a taxpayer paid service, then I think the people who receive that service should help the taxpayers pay for it,” said Craft. “When the Parkway asked about water I told them the only way is if they agreed to be annexed. The city would also be interested if these people wish to be annexed.”

Letcher County Surveyor Richard Hall told the council that everything in the current annexation plan is going well and he expects final approvals to be made soon. Craft said as soon as the current process is finished the city will take a serious look at the Dry Fork area.

In his Mayor’s Report, Craft told the council that as of February 1, motorists who park in the wrong direction on Main Street will be fined. Craft said the practice is hazardous and unsightly and must be stopped.

Craft asked the council to note that several of the current bills owed by the city would be paid for by the alcohol sales tax, including invoices for new Christmas decorations.

Craft reported that the Kentucky Division of Waste Management will do a preliminary examination of the old Salyer Radio & TV building to determine the best course for removing hazardous materials such as asbestos. Craft said once the building is safe to inhabit, it will be used as additional space for city government and would make a good site for the police department or another city agency and will help to alleviate the overcrowding in City Hall.

Craft asked Veolia Water to look into installing water softening equipment at the city water plant and to report on the feasibility to the council. He also said he wanted to inform the council that he has discussed the possibility of the city acquiring the old Daniel Boone Hotel building from the Dawahare family. He said he would like to begin serious negotiations to acquire the property with the purpose of turning it into a hotel to enhance tourism and to draw positive attention to the city.

At the request of council member Perry Fowler, the council approved a start date of March 15 on water line upgrades at Fields Cliff. Craft said money for the project has been approved and is in place, and that several other projects which will benefit the city should begin soon.

“I’m excited about what’s going on in the city,” said Craft. “You six people (the council) are such an integral part of it.”