New work on tap at Artwalk 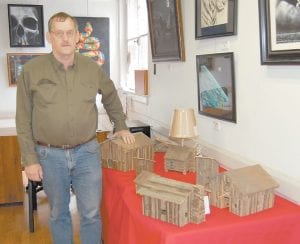 Jerry Howard of Knott County stands next to miniature replicas he made of barns, cabins and outhouses using wood from structures that are at least 100 years old. His work will be on display at the 229 Underground Gallery in downtown Whitesburg during the Redbud Artwalk this weekend.

Intricate cabins and barns made by a Knott County man are the newest additions to the 229 Underground Gallery during the Redbud Artwalk this weekend.

Jerry Howard’s son wanted to know what his great-grandparents’ house looked like and Howard only found a few photographs to show him. Howard’s son suggested he make a three-dimensional model of the homeplace.

Howard, a retired engineer consultant, asked his aunts and uncles to give a general idea of what the homeplace in Magoffin County looked like and he took old reclaimed barn wood to create the structure.

In 2009, it took Howard about a month to create the homeplace. He said it took a lot of sawing, sizing and gluing small pieces of wood together.

Howard has made about 50 different creations, mostly special requests from people wanting replicas of their own barns or cabins. His specialty is custom orders.

“A lot of people can relate to these and have good memories about barns when they grew up,” said Howard.

He makes miniature replicas of structures that existed around the Civil War era and up until about the 1950s. He has even made outhouses, which consist of 125 small pieces of wood, which he said are time consuming to assemble.

“You’ve got to have some patience,” said Howard.

The wood comes from structures that are at least 100 years old.

Howard is a member of the Kentucky Guild of Artists and Craftsmen in Berea, Kentucky Appalachian Artisan Center in Hindman and David Appalachian Crafts in David.

The Redbud Artwalk, which will feature a variety of art from many different local artists, is from 4 to 9 p.m. on April 28 in downtown Whitesburg. The Artwalk begins at Appalshop, located at 91 Madison Avenue, and proceeds toward Main Street.

The 229 Underground Gallery is open from noon until 6 p.m. on Thursdays, Fridays and Saturdays.