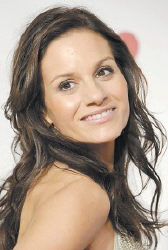 When Kara DioGuardi accepted her job as the fourth judge on “American Idol,” she did not immediately grasp the enormity of a full-time gig on the mostwatched TV show in the nation.

“I probably in my own way didn’t really take in what a huge thing it was, just ’cause it would be so overwhelming,” she said. “Until I kind of showed up and was like, ‘Omigod, what am I doing here? This is, like, huge!’ And then it really hit me when we went live that, wow, ‘I got to speak live in front of 30 million people?'”

Since joining the judges’ panel, DioGuardi has weathered the curve balls of live television, eye rolls from Simon Cowell and criticism of her judging abilities by the viewer peanut gallery. As the eighth season progresses to a showdown between Adam Lambert and Someone Else, the 38- year-old songwriter and producer’s “saving grace” has been connecting with the finalists and helping steer them in the right direction, by way of her industry expertise.

“It’s not an easy job,” DioGuardi said in an interview from Los Angeles. “I mean, there was nothing wrong with that panel. It wasn’t like I had to fix something. It was great. So to come in and kind of be part of it was really tricky. …

“So I look at it sometimes and I think, ‘All right, maybe I could have done this better or that better,’ but I’m literally just trying not to” act like “a bumbling moron because I’m so, you know, nervous at times,” she said.

And ? in an “Idol” first ? only two judges were allowed to review a singer on April 14 to save time. The show has been running over schedule, which Cowell blamed on DioGuardi and Abdul talking too much.

“Of course, we’re going to have time issues ? you added a fourth judge! What did you think? I was going to just sit there and, you know, like do a grading system on my hands? Which probably I would mess up because you know how my remedial math is,” DioGuardi joked, referring to the now-classic blunder she made while reviewing Lambert (“I’ve got six words for you: One of the best performances of the night!”).

“It’s hard for (the judges) to figure out whether they’ve spoken for 30 seconds or 45 seconds, so … we’re going to try and help them with that and give them a sense of their timing so that we keep it under control a bit more,” Frot- Coutaz said.

DioGuardi, whose criticism can be as long-winded as Cowell’s is blunt, said she’s making an effort to cut her comments short. She seems to have scaled back in the last couple weeks.

Her remarks are generally rife with musical jargon (especially “artistry”) and she has been an unwitting target of hecklers in the studio audience. Recently, cast-off Megan Corkey’s brother shouted: “Broken record!”

DioGuardi, who has worked with such singers as Christina Aguilera, Celine Dion and Kelly Clarkson, said she tries to tune out the negativity and focus on her goal: “to help America find the best ‘Idol’ and to help these kids.”

It’s clear she takes her job very seriously. In conversation, she offered unprompted, thoughtful analyses of various finalists; she often schedules one-on-one advising sessions with hopefuls after they get voted off.

As for her recent on-camera gaffes, including a reference to the legendary New York club Studio 54 as “Studio 57,” she said: “It’s OK. I’ll poke fun at myself and I’ll look like an idiot on that front. But I want to make sure that what I’m telling them makes sense and it has meaning.”

How does she fit in with Cowell and the gang?

“I’m a combination of them in different ways,” she said. “I think I can be hard sometimes and then soft in other times, depending on what I think the contestant needs.”

Frot-Coutaz said the four-judge system has worked thus far, and viewers have responded positively to DioGuardi.

“We’re certainly not talking about going back to three at this point. … We’re pleased with the fourth judge,” she said.

Plus, Frot-Coutaz noted, DioGuardi provided one of the season’s greatest moments: Her feud with Katrina “Bikini Girl” Darrell during the audition rounds, when the judge — a talented singer in her own right — told the scantily clad wannabe to bring a stripper pole next time.

The exchange, viewed by some as immature on DioGuardi’s part, revealed an intriguing glimpse into her personality — less Pollyanna, more Troublemaker.

DioGuardi said she’s funnier than she appears on the show. But she’s not completely stiff.

“I noticed that my hands go all over the place, and sometimes I look like I’m a gesticulating fool,” she said. “You know, it’s very Italian.”