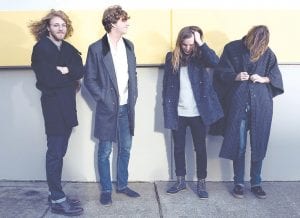 TO PLAY APRIL 8 — Desert Noises, a rising band from Utah, will perform in Whitesburg Tuesday.

About a year ago, St. Paul & The Broken Bones, a high-energy but little-known rhythm and blues band, traveled to Whitesburg to make its first concert appearance outside of its home base of Florence, Alabama, in the famed Muscle Shoals area.

This past Saturday, St. Paul & The Broken Bones continued its rapid ascendency with an appearance on “CBS Saturday Morning,” about six weeks after the release of its successful debut album, Half the City.

The next up-and-coming band to perform in Whitesburg will be Desert Noises, a band from Utah whose second album, 27 Ways, was released March 25.

The band will take the Summit City stage next Tuesday night (April 8) around 8 p.m. There will be no opening act.

Desert Noises, which combines “jangle-rich rock and roll” with blues, Americana and psychedelic rock, includes among its ranks a member of the famed musical Osmond family and counts among its influences older acts such as Tom Petty, Fleetwood Mac and Led Zeppelin and new taste-makers Tame Impala and Mumford & Sons

In addition to drawing rave reviews for 27 Ways — it’s the current album of the week at college radio station KWCR at Weber State University in Utah — Desert Noises has scored a coveted slot in Lollapalooza festival in Chicago this coming August.

27 Ways was recored in El Paso, Texas and produced by Nick Jodoin, who has worked with more established bands such as Black Rebel Motorcycle Club.

While they don’t promote the fact, Tyler Osmond is the youngest of eight sons born to Alan and Suzanne Osmond. Alan Osmond was a member of The Osmonds, whose string of hits in the early 1970’s included “One Bad Apple” and “Yo Yo.”

Persons wishing more information about next Tuesday’s show may call 633-2715.