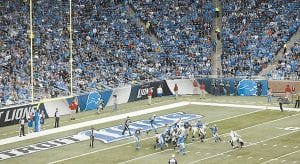 The NFL is moving back extra-point kicks and allowing defenses to score on conversion turnovers.

The owners on Tuesday approved the competition committee’s proposal to snap the ball from the 15- yard line on PATs to make them more challenging. In recent seasons, kickers made more than 99 percent of the kicks with the ball snapped from the 2.

“There was strong sentiment coming out of our meetings in March that something had to be done with our extra point,” said Texans general manager Rick Smith, a member of the competition committee that proposed this specific rule change. “From a kicking perspective the try was over 99 percent (successful), so we tried to add skill to the play.

“It was also a ceremonial play.”

The accepted proposal places the 2-point conversion at the 2, and allows the defense to return a turnover to the other end zone for the two points, similar to the college rule. The defense can also score two points by returning a botched kick.

The change was approved only for 2015, then will be reviewed. But Smith predicts it will stay.

“This isn’t an experiment,” Smith added. “This is a rule change. We expect this to be a part of the game.”

The vote was 30-2. Washington and Oakland voted no.

New England and Phila delphia also made suggestions on changing the extra point, but the owners went with the powerful committee’s recommendation.

Officiating chief Dean Blandino said the percentage of kicks made from the 33- or 34-yard line has been around 93 percent. And Troy Vincent, in charge of NFL football operations, noted that placekickers can handle such an alteration.

“The kicker’s a skill position now,” Vincent said. “We’re not trying to take the foot out of the game.”

The short-lived XFXL, a developmental league, used the 15-yard line as the line of scrimmage on extra point placements.

A major part of the change is the hope more teams will go for two points. In contrast to the traditional extra point kick from short distance, that is an exciting and usually a critical play.

Some teams could look into 2-point specialists; there’s conjecture that Eagles coach Chip Kelly brought in Tim Tebow to potentially fill such a role.