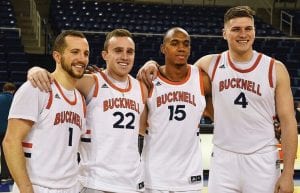 Matt O’Reilly (22) says his friend, Nate Sestina (4), will bring a “different” talent to Kentucky with his size and ability to stretch the floor. He also says Sestina’s “presence” in the locker room will be huge because he’s someone teammates like Kimbal Mackenzie (1) and Nate Jones (15) at Bucknell loved being around. (Bucknell Athletics Photo)

When it comes to Nate Sestina, any information from Matt O’Reilly is likely to be biased because the two became such good friends during their basketball careers at Bucknell University, where they were on the team together for four years.

Now Sestina is coming to Kentucky as a graduate transfer and O’Reilly says the 6-9 Sestina is someone Kentucky fans are going to love.

“He is super family oriented and generated his values through his love for his family and God and that shows. He’ll do anything for you if he loves you and he has a pretty infectious attitude,” O’Reilly said. “He’s from a very small town (Emporium, Pa.), and that frequently shows, but that’s not a negative thing by any means.

“He’s very down to earth, values the important things in life, and is a really fun guy to be around. He used to be incredibly shy, but he’s grown a lot as an individual and his personality and warmth has become one of his strongest traits. Can’t say enough good things about the guy.

“If you’re looking for a media darling and fan favorite, Sesti is your guy! He’s warm, humble and definitely isn’t hard on the eyes. He will most definitely fill that role.”

O’Reilly is from California but knows plenty about Kentucky basketball. He played his senior season at Prolific Prep, a team that came to Kentucky to play in several basketball showcases while he was there.

“We played in a couple of tournaments, playing primarily at Mc- Cracken County High School. We were met with ridiculous hospitality — credit to Melanie Burkeen, a member of BBN, and the entire Burkeen family who welcomed us with open arms and made us feel like family,” O’Reilly said.

“One of my teammates and close friends, Josh Jackson, actually took an unofficial visit to Kentucky on one of our trips and I joined him. I have had a couple of close friends join BBN, like Skal Labissiere for example, and have seen the ways in which it can change your life.”

Sestina was redshirted his freshman year because of an injury and then played behind Zach Thomas and Nana Foulland for two years before averaging 15.8 points and 8.5 rebounds per game last season while shooting 53.6 percent from the field and 38 percent (41 of 108) from 3-point range. He scored in double figures in 27 of 31 games.

“What impressed me the most about Nate over his time at Bucknell has been his patience and his diligence. He has been steadily on his grind, working hard to achieve great things, yet he remained patient waiting for his time to showcase the hard work he put in,” O’Reilly said.

“He never got down or pouted playing behind two amazing players in Zach Thomas and Nana Foulland, just remained patient and worked and ultimately you can see the ways it worked out for him. That’s very rare in a guy as gifted and hard working as Nate is.

“He didn’t choose to leave Bucknell. He loves the school and our teammates unconditionally and every player and coach that he’s been around in his time here understands that,” O’Reilly said. “He chose to take a chance on himself, knowing he’s given everything he had to Bucknell for four amazing years.

“It is always surprising to see someone go to Kentucky. However, he deserves it, and any real fan of Bucknell knows that.”

Kentucky’s roster again will be in flux. Reid Travis, last year’s graduate transfer, has graduated. Sophomore PJ Washington along with freshmen Keldon Johnson and Tyler Herro have left for the NBA. Sophomore Jemarl Baker is transferring. Nick Richards and EJ Montgomery are testing the NBA draft Kentucky has five freshmen coming in along with Sestina to go with returning players Ashton Hagans and Immanuel Quickley.

“Sesti has learned a lot from some incredible leaders here at Bucknell and is ready and able to take on that same role at Kentucky,” O’Reilly said.

Some wonder exactly how he will fit in at UK after playing in the Patriot League. Travis was a two-time all-conference selection at Stanford. Sestina was a second team all-conference pick last year.

O’Reilly says not to worry because

Sestina will be just fine.

“I think that Nate provides coach Cal with a talent that is quite different from what Kentucky has seen recently. He is tall, unexpectedly strong and no doubt a front court player. However, his ability to really stretch the floor while also rebounding at an extremely high level will greatly benefit Kentucky, as coach Cal knows,” O’Reilly said.

“He will also be a huge addition in regards to experience leadership. Seeing the ways in which Travis was a key for this year’s Kentucky team, Nate is a great fit to continue that trend. He is experienced, wants to win, loves his teammates and works extremely hard. His presence in a locker room full of young lottery talent is extremely valuable.”

Travis had to adjust to the enormous spotlight that is on Kentucky basketball daily. O’Reilly knows Sestina will have some of the same adjustments to make after playing at Bucknell and not being highly recruited out of high school.

“Coming from a tiny town, moving towards a small school in Bucknell, Nate had to make a number of adjustments. These adjustments will be far greater as he moves to Kentucky,” O’Reilly said. “However, Nate has matured steadily every year that I’ve known him, and he has the drive and support system to be successful regardless of the circumstance.”

Because he wants to focus on his senior season and helping Louisville Christian Academy win a state championship, offensive lineman John Young has decided to make his college choice on April 29.

“I have visited all the schools I want to see,” the 6-6, 285-pound Young said. “I have never been close to committing to any school. I never wanted to rush. I wanted to take all my visits so I could make an informed decision. I haven’t exactly made my final decision. I just put a deadline on it to get it done. I have found a couple of schools with great academics, great football, great coaching staff. So I’ve got an idea about what I want to do.”

Young is a four-star recruit ranked among the nation’s top 25 offensive tackles and one of the top five players in Kentucky. His final six schools are Kentucky, Louisville, Purdue, Ohio State, Georgia and Michigan.

Young says he has “always been a Kentucky fan” and has watched UK football his whole life, including going to games. His father is a former Louisville cheerleader, his mother went to Western Kentucky and his 21-year-old sister, Sarah, goes to Louisville.

Most recruiting analysts consider Young a lock for Kentucky. But he says new Louisville coach Scott Satterfield has impressed him.

“I have hit it off with the new coaching staff. I was not a huge fan of the old one (Bobby Petrino),” Young said. “They have talked to me a lot and I think they can turn the program around.”

He says he is “comfortable” around Kentucky coach Mark Stoops and his staff — and notes again that he’s always been a Kentucky fan.