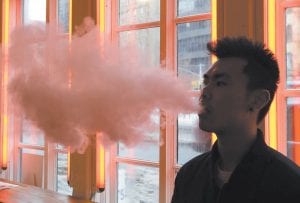 The first peek at a major study of how Americans smoke suggests many use combinations of products, and often e-cigarettes are part of the mix. It’s a preliminary finding, but it highlights some key questions as health officials assess e-cigarettes. (AP Photo)

The first peek at a major study of how Americans smoke suggests many use combinations of products, and often e-cigarettes are part of the mix.

It’s a preliminary finding, but it highlights some key questions as health officials assess electronic cigarettes.

“Are e-cigarettes a step toward a cigarette smoker getting off of cigarettes? Or are e-cigarettes a crutch so they can get nicotine in places and times when they wouldn’t normally be allowed to smoke cigarettes?” asked Dr. Andrew Hyland of the Roswell Park Cancer Institute, the primary investigator for a huge government study of trends in smoking and tobacco use.

Hyland’s study is one of a number of projects that scientists are watching as they explore the public health implications of e-cigarettes. Here are some things to know:

Hyland presented preliminary findings from the first 20,000 people to enroll in the study, a baseline as the Food and Drug Administration and National Institutes of Health track how use of tobacco products, or alternatives like tobaccofree e-cigarettes, is evolving.

A fraction — 28 percent of adults and nearly 9 percent of youths — reported they currently use any type of tobacco product, Hyland said.

About 40 percent of those current tobacco users report using two or more products. And half say battery-powered e-cigarettes are one of the multiple products they use, Hyland found. In fact, the most common combination was cigarettes and e-cigarettes.

Mitch Zeller, director of the FDA’s Center for Tobacco Products, said the early findings showing use of more than one type of tobacco product are compelling and underscore “how popular e-cigarettes have become.”

Ultimately, the PATH study — it stands for Population Assessment of Tobacco and Health — will follow 46,000 people ages 12 and older over five years, a source of information as FDA decides how to regulate tobacco-related products.

Why The Extra Interest In E-Cigarettes?

Policymakers are debating the health effects of “vaping” as it grows in popularity. Many anti-smoking advocates consider e-cigarettes a safer alternative for smokers who can’t or don’t want to quit altogether.

E- cigarettes work by heating liquid nicotine into an inhalable vapor. They contain fewer toxic substances than burning traditional cigarettes. But health officials warn that they shouldn’t be considered harmless and say much more needs to be known about long-term effects.

Critics ask if they keep smokers addicted or even act as a gateway to hook new users who will try tobacco.

Concern about e-cigarettes grew after a different government study in December found some teens who’d never smoked a real cigarette were trying out the electronic kind.

“Is it a passing fancy or something that sticks with them?” Dr. Wilson Compton, deputy director of NIH’s National Institute on Drug Abuse, said in an interview with The Associated Press. He hopes that over the next few years, the new PATH study will help tell.

The FDA has proposed regulating e-cigarettes, including banning sales to minors, a step that many states already have taken.

Nicotine levels vary widely by type of e-cigarette, from small amounts to nearly as much as a traditional cigarette, he said. Users learn to puff a bit differently as they draw in vapor, and even the voltage in the device’s wires may affect nicotine delivery, he explained. NIDA plans to fund development of what Compton calls a “standard e-cigarette” that will be a yardstick for comparison with the different e-cigarettes on the market.