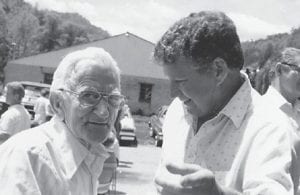 The late Bill Howard, father of Whitesburg correspondent Oma Hatton, and the late John Stidham Jr. talked at the last Marlowe reunion, which Oma Hatton believes was in 1978.

Hello everyone, hope you are all doing well and enjoying this weather. I sure am. I’ve worked outside about all day. Tired but pleased to get some things done that I wanted to do and it looks good.

It’s only Wednesday, and if things work out I’ll be in Georgetown with my son Astor “Red” and his wife Rosemary. I’m looking forward to getting to eat some of Astor’s good cooking. He loves to cook and he can do it better than me. I hate to admit it.

I want to wish Bruce Gilley a belated happy birthday on April 1. Also, my friends Shirley and Carfa Niece had their 58th wedding anniversary on March 31.

Our sympathy goes out to the family of John Williams. Everyone loved and respected him. It was a shock. He seemed to be doing so well.

My brother Hillard Howard had a birthday April 2 and I called him. We all miss him so bad since he moved to Florida. I’m sure he misses all his big family here.

Dorthy Tacket said she got a call from Claudine (Brown) Sturgill and her Mountain Eagle had run out and she wanted her to send her the ad so she could renew. Dorthy just got it for her. That was real nice. It pays to do a good deed. It comes back to you. 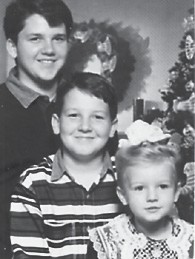 Josh Howard, Caleb Howard and Gabrielle Howard Adams are the children of Bobby Ray and Debbie Howard. Whitesburg correspondent Oma Hatton says, the photograph “was made some time ago. They have changed since then.”

Dorthy’s children were out of town celebrating the birthdays of her son Albert Tacket and her daughter Jeanette Yonts. They went to a big flea market and Dorthy saw a beautiful entertainment center. She didn’t have a truck to take it home and her children went together and bought it and surprised her with it. She was so happy. Her children are so good to her.

She’s a good mother and a good friend to me. We went to grade school together a few years back.

My son Billy Hatton and I went to Pine Mountain Grill for breakfast and didn’t see anyone we knew.

We were pleased to see S.T. Wright and his pretty friend at our church. I went back and sat with them. I hope they come back. They said they really enjoyed it. A lot of our people were sick and couldn’t be there, but we were so glad Shirley Niece was able to be there. My nephew Bro. Caleb Howard was our minister that night. He’s a member there. We all love him and his wife Erica and their beautiful children. 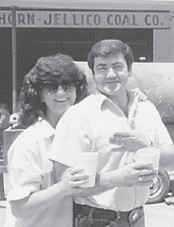 Charles Howard and sister Joann Howard Brown are pictured at the last Marlowe reunion in front of the old Marlowe store. Whitesburg correspondent Oma Hatton says, “All the people had moved away. We miss all of them.”

My son Larry Hatton and his wife Linda went to their camper for a couple of nights and really enjoyed it.

I enjoyed talking to Linda (Pennington) Hall. She liked the picture I put in last week. It was Linda and Mildred Necessary, the late Anne Miller and my sister Betty Sue Howard. One of them asked me which one was the prettiest. I wouldn’t touch that with a 10-foot pole! They were all pretty and still are. They were really young then!

Betty Anderson, we are having a hard time getting together. We are calling each other when the other is talking.

It was good hearing from my cousin Ruby Jean Howard. She is doing better. She has been having a hard time, all kinds of health problems. I hope she keeps improving. She said her brother-in-law Dexter Howard had been to visit her. He was doing pretty well. He has been real sick himself and after losing his wife, Brenda, he’s doing the best he can, being alone. He needs everyone’s prayers and Ruby Jean also.

I’m having to get this in early. I’m going to be gone over the weekend and I’m real excited.

May God bless all of you. Try to be in church this weekend. Our church will be having revival on April 14 with Bro. Jimmy Jewel. You will enjoy hearing him. Please come and be with Bro. John Conn and the congregation.