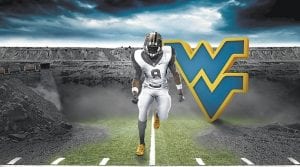 IMAGE PULLED — Mountaintop removal mining activists demanded Nike pull its promotional ad for a new West Virginia football uniform because it featured a strip mine. The gear was designed in tribute to 29 men killed in the Upper Big Branch mine explosion. But activists pointed out the mine was an underground operation. (AP Photo/Nike)

Coal is out of the picture: The latest version of an ad promoting a Nike Pro Combat football uniform for the West Virginia Mountaineers shows a stadium rather than a strip mine behind a player.

Nike revised the ad last week after environmentalists complained about the depiction of a mountaintop removal mine behind the image of a uniform intended to honor 29 men killed in the Upper Big Branch mine blast.

That mine was an underground operation.

Activists said the ad appeared to be a tacit endorsement of mountaintop removal by both Nike and WVU.

Both insisted that wasn’t their intention.

Nike says it designed the black and white uniforms as a tribute to the state’s coal mining heritage.

They’ll be worn in the Backyard Brawl at Pittsburgh Nov. 26.