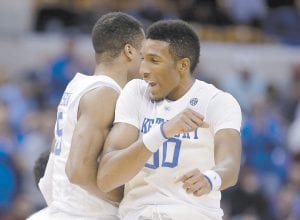 Dakari Johnson scored 11 points, Andrew Harrison had 10 and No. 1 Kentucky used a dominant defense to blow out No. 4 Kansas 72-40 in Tuesday night’s Champions Classic.

Wayne Selden Jr. had nine points for the Jayhawks, and Cliff Alexander finished with eight.

The Wildcats led by as much as 35-17 in the first half. After Kansas closed to 38-28 at the half, Kentucky opened the second half with six straight points and continued extending the lead throughout the second half.

Kentucky has now won its first three games by 40, 19 and 32 points. But Tuesday’s victory was easily the most impressive of the three and helped reinforce the image that last season’s national championship runner-ups could be good enough to go undefeated this season. The last men’s team with a perfect season was Indiana in 1975-76.

The Jayhawks shot just 24.2 percent in the first half. They were nearly twice as bad in the second half, when they made only 3 of 23 shots — 13.0 percent.

Kentucky: The Wildcats now have a 16-game lead over second-place Kansas for the most wins in college basketball. Kentucky has 2,143 all-time wins and has won in three different buildings in downtown Indianapolis — the RCA Dome, Lucas Oil Stadium and Bankers Life Fieldhouse.

Kansas: The Jayhawks may argue for a different draw in next year’s classic draw. They lost to Kentucky in this event in 2011 and to the Wildcats in the 2012 national championship game.