No. 3 Kentucky reloads with four freshmen 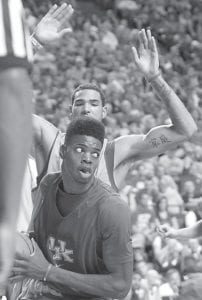 Kentucky lost six players from last year’s national championship team and is again projected to be title contender this season.

The high expectations remain after the Wildcats won their eighth title behind freshmen Anthony Davis, Michael Kidd-Gilchrist and Marquis Teague. All were firstround NBA draft picks along with Terrence Jones; Doron Lamb and Darius Miller went in the second round.

It’s a tough act to follow for freshmen Nerlens Noel, Alex Poythress, Archie Goodwin and Willie Cauley-Stein — but Kentucky is ranked No. 3 in the preseason poll.

Nearly seven months after Calipari won his first title with a team anchored by underclassmen, he is eager to see if this group can go as far as their predecessors.

“We’re just so young,” Calipari said. “If we had to play a game right now, we’d probably be the fifth, sixth, seventh, eighth team in our league. Now, let’s hope in two months that that’s not the case.

“I like our talent. I like our size. I like our length. We have some guys with pretty good speed. We’re just not a good basketball team right now. Too many young guys that we’re trying to bring along.”

Replacing a lineup that accounted for 92 percent of last year’s offense definitely gives Calipari room to exlpore many options with an incoming class that includes three McDonald’s All-Americans. The Wildcats are taller than last year’s squad and have just as much quickness, in addition to veterans ready to fill a variety of roles.

Leading the way is 6-foot-10 forward Noel, considered the nation’s top recruit. His offensive and shot-blocking skills have already drawn comparisons to Davis, That’s high praise considering Davis earned many of the nation’s top awards and was the NBA’s top overall pick.

Noel acknowledges the comparisons to Davis, but said, “this is a different day (and I’m a) different person. I’m bringing my own game to this team and interested in winning games.”

Poythress, 6-7, is considered one of the nation’s most versatile forwards and can play several positions. The same has been said about 6-4 guard Goodwin, who gives Kentucky another excellent swingman.

Cauley-Stein, a 7-foot center, lacks the accolades of his fellow rookies but brings athleticism that has Calipari considering pairing him with Noel. Calipari could even play a trio of big men with a lineup that features Noel, Cauley-Stein and 6-10 sophomore Kyle Wiltjer, the Wildcats’ leading returning scorer at 5.0 points per game

Just don’t ask Calipari how this group stacks up against last year’s team — one he describes as a once-in-a-lifetime squad.

And like any Calipari team, the question is whether that process is for the short or long term.

Of the 15 Wildcats that have gone on to the NBA since Calipari’s arrival in 2010, eight left after their freshmen season. The departure of last year’s entire rookie class has ratcheted up questions about this year’s recruits, all of whom are already being projected as high NBA draft choices on various web sites.

He was the subject of an NCAA probe into the funding of his unoffi cial visits to Kentucky before being cleared to play earlier this month. While that has eased the concerns of Big Blue Nation for the time being, neither he nor his fellow freshmen have said specifi- cally how long they’ll stay.

“That’s a hard question to answer,” Cauley-Stein said. “A lot depends on how you feel at the end of the season.”

No matter what they decide, Calipari has dealt with turnover very well.

“We just deal with what’s left. It’s funny. We’ve had kids leave every year, and our teams have been good, if not better. So they’re chasing their dream, and it’s not hurting us.”

As that guessing game continues, Calipari is teaching the Wildcats how to play defense while trying to figure out his lineup and where the offense will come from.

There’s potential for all four freshmen to have breakout seasons, along with opportunities for two transfers now eligible to get minutes and for a group of returnees to step up their contributions.

Julius May, a 6-2 guard, could play a significant role for Kentucky. A graduate student who averaged 14.1 points and 2.5 assists last season at Wright State before transferring, he could provide the veteran leadership needed along with Twany Beckham, the Wildcats’ only senior.

“More often than not it could be me (speaking up), but other guys have spoken up at other times,” Mays said. “We have a young group but a very mature group, and that’s important.”

Sophomore Ryan Harrow, also 6-2, is also eligible after transferring from North Carolina State and is expected to contribute at point guard. Wiltjer provides a backup big man, needing to improve his scoring and defense.