No. 8 was never Dale Jr.’s number to keep

Q: What is your opinion of Teresa Earnhardt keeping the number “8” from Dale Jr.? I think it is wrong. – Angela H., Florida

A: Angela, in reality, Dale Jr. does not own the No. 8; Teresa and DEI do. Michael Waltrip probably said it best recently on his satellite radio show.

“When I left (DEI) I tried to take the 15 number just for NAPA, and I knew the 15 didn’t have any sentimental value to Teresa [Earnhardt],” Waltrip said. “But she certainly made it clear she was going to keep that number, so I didn’t have any doubt that she was gonna keep Dale Jr.’s number too.”

Well, I understand where Michael is coming from, but in strict business law, it’s not Dale Jr.’s number to keep.

I feel Teresa has every right to keep the number “8” as Richard Childress has rights when it comes to the most beloved number (along with the 43) in NASCAR, specifically, the number “3” brand and his decision to keep it parked and continue its Dale Earnhardt designation. 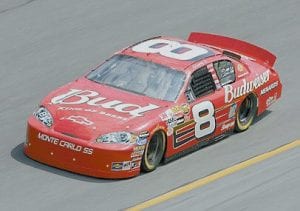 Dale Earnhardt Jr., who moves over to Rick Hendrick in 2008, is shown here in the No. 8 Chevy. (Getty Images)

It takes years for fans to identify with certain numbers, teams and drivers, but the company is the owner, period. Mark Martin seems to be the choice for the “8 in ’08,” possibly sharing a Cup schedule with Aric Almirola. As for the 01 car, I’d say look for Greg Biffle or J.J. Yeley to fill the seat.

Overall, I feel Teresa gets the rough treatment in everything she does because she is more in the background of the DEI business. However, she was Dale’s wife and did do much for his success from a business and personal standpoint, and I feel people should always respect that.

Q: Greg, I’d like to know what you mean when you say your “sources” inform you? Exactly what do you mean, because now I see that it is in general news and on TV about Joe Gibbs going over to Toyota, and I read it in your column long ago. How do you get to know this stuff? – Kevin K., Texas

A: Kevin, thanks for your comment, but I’ll admit I’ve been wrong probably as many times as I’ve been right with opinions and information from sources!

The best way to explain “my sources” is that I’m no longer a beginner at this business, and motor racing has been both a wonderful hobby and an avocation for me since 1972. I still write, in addition to this column, a monthly interview for Performance Racing Industry Magazine (trade only, not available at the newsstand) and also periodically for Chris Economaki’s National Speed Sport News, the nation’s most respected and best read weekly racing newspaper. My sources come thanks to the many relationships developed over the years in motor sports and the many interviews I’ve conducted (Joe Gibbs included).

I guess I’m looked at as one of the “trusted old-timers,” and I respect my sources’ need for confidentiality. As for Toyota wooing Gibbs over from Chevy, I also hear that maybe Dodge is prepared to throw its hat in the ring, but based strictly on company stability at this time, my vote goes to Toyota, as Chrysler is going through a “new owner” process while Toyota continues to move upward. By the way, Team Penske is the other rumored Toyota “changeover.”