No ‘deadbeats’ are allowed, Morgan says of July 4 show 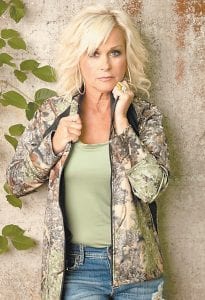 Free show kicks off at 5:30 p.m. Country music singer Lorrie Morgan (above) will headline a free evening of music and fireworks on Monday, July 4 at River Park in Whitesburg. Mayor James W. Craft said celebration will begin at 5:30 p.m.

Concertgoers attending the City of Whitesburg’s Fourth of July celebration at River Park may be in for a surprise or two from country star Lorrie Morgan.

Fans of Morgan may expect to hear her three number one hits — “Five Minutes,” “What Part of No” and “I Didn’t Know My Own Strength.” She may sing “Except For Monday,” “Something In Red” and “Watch Me.”

Morgan may also perform “Spilt Milk” and “Slow,” two of her favorite songs from “Letting Go … Slow,” which is one of her two new albums released this year. “Slow” was cowritten with her daughter-in-law Ashlee Hewitt.

The album “A Picture of Me,” released in March, includes eight of Morgan’s hits, four cover songs, one song co-written by Morgan and three songs written by her late husband, Keith Whitley.

“I have always been a fan of Keith’s and I’ve never really recorded anything of Keith’s,” she said. “This was just kind of my tribute to him. I loved him more than anything in the world. Just to be able to pay tribute to him means a lot.”

Whitley, who charted 19 singles on the Billboard country music chart after growing up in Sandy Hook, Ky., was married to Morgan when he died in 1989 at age 33. Before his death, Whitley, who got his professional start in the mid- Seventies as the lead singer for Ralph Stanley and the Clinch Mountain Boys, had been preparing to record an album with Morgan, who was on tour at the time of his passing.

Morgan isn’t locked in to what songs she’ll sing or in what order the songs will be performed when she takes the stage in Whitesburg. She doesn’t go by set lists, which she said keeps her band members on their toes.

Morgan plays off the crowd’s energy.

“If they are deadbeats, I’m going to give them a deadbeat show — I can tell you that right now,” said Morgan. “If they are whooping and hollering and having a good time then that makes me want to give more.”

She plans to bring her rescue Pit bull terrier, Weezy, with her to Whitesburg. She said her dog will probably be in her bunk on the tour bus.

“He doesn’t like a lot of loud music and noises,” said Morgan.

Sometimes Weezy can be seen standing on the side of the stage with her son, Jesse Keith Whitley.

Morgan said she is looking forward to performing in Whitesburg.

“We’ll just have a nice show and sit back and enjoy the fireworks,” she said.

Morgan spoke with The Mountain Eagle Tuesday morning while she was cleaning her living room before a potential buyer was to stop by to look at her 7,372-square-foot home in Lebanon, Tenn., about an hour from Nashville, Tenn. She and her husband, Randy White, a Tennessee businessman, are trying to sell their $1.2 million house in an attempt to downsize.

“I’m going to miss it,” said Morgan. “It’s something we created together, my husband and I. We want to scale down. We’re tired. We’ve put a lot into this house. We take care of this house ourselves, the grounds, everything. I want to come home off the road and enjoy life. I want him to enjoy life.”

Morgan enjoys having company over to her house to play music with her. Guests have included Tracy Lawrence, Darryl Worley, Pam Tillis, T.G. Sheppard and Kelly Lang.

“We have a lot of fun,” she said. “We created this backyard and this whole house for our children and people that we love that we want to come visit. We want them to leave having fun. It’s a calming place. I tell my husband all the time I stay in five star hotels everywhere we go and there is no place I’d rather be and no place is more beautiful than when I come home. It’s breathtaking and when we move we will start all over again.”

Morgan has landed more than 25 singles on Billboard Hot Country Singles charts since 1989. She has sold more than eight million records and has recorded 12 albums.

Her father, a member of the Country Music Hall of Fame, died in 1975. Morgan toured with her father’s band for a couple of years before branching out on her own.

Whitesburg Mayor James Wiley Craft said Monday’s free July 4 celebration will get underway at approximately 5:30 p.m. at River Park, located near the Whitesburg hospital, when Will Caudill and Route 7 take the stage. Shortt of Hazard will perform at approximately 7 p.m.

Craft said a fireworks show will take place after Morgan’s headlining performance, which is expected to start around 8 p.m.

Food and beverages, including shaved ice, will be for sale in portable booths. Attractions such as face painting and inflatables will also be available, the mayor said.