No ‘harder worker’ than UK signee 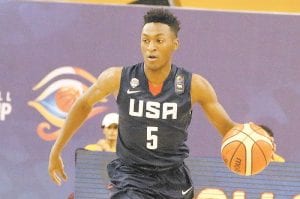 Immanuel Quickley has a unique work ethic that should help him at Kentucky. (USA Basketball Photo)

“Without a doubt, his work ethic. There are better pure ath- letes out there, but there isn’t a harder worker,” said Teter about the John Carroll (Md.) School point guard who signed with UK in November.

Teter remembers keeping up with Quickley last summer when he was playing abroad with Team USA — coached by John Calipari — and on the Adidas circuit. He remembers sending a text message to Quickley after Team USA lost to Canada in Egypt.

“At that point I think he had stayed at his home maybe three nights all summer and he said he was really tired and had a long flight ahead of him,” Teter said. “The next day, I was sitting in my office and I heard the sound of the ball bouncing and the shooting machine going off. I thought to myself, ‘There is no way that is Immanuel, it can’t be.’ 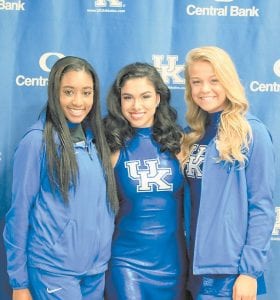 North Laurel High School graduate Savannah Guzman, center, always wanted to be part of the UK dance team and enjoys the “family” atmosphere the team has. (Photo by Tammie Brown)

“I walked out and sure enough it was him in a full sweat, running though drills and getting shots up. It was that moment that I realized I had never been around someone with that drive and passion for anything and that his work ethic was what was going to make him a success in whatever he does.”

John Carroll High coach John Zito, a former Division I player and assistant coach, says that effort is the norm for Quickley.

“He puts in so much time in the gym outside of our team practice and other team functions,” Zito said “He is constantly in the gym. There were times I almost had to ask him to go home and get out of the gym. He’s on a mission. He knows what he wants from this basketball thing and knows what it takes to get to where he wants to go.”

Zito knows most college freshmen need work on their body strength because the collegiate game is more physical. Quickley, like a lot of other players, needs to add weight and muscle.

“Once he gets to Kentucky and gets on a great nutrition plan and has full access to all those resources at Kentucky, he will add the weight. He has a great frame and a 6-8 wingspan. He has thick legs on the bottom but needs to fill out in the hips, and he will in the summer,” Zito said.

Being a Kentucky signee has never bothered Quickley, even though it clearly put him in the spotlight all season. He will play in the McDonald’s All-American Game March 28 in Atlanta along with UK signee Keldon Johnson.

“Immanuel is a special kid on and off the court. Deeply rooted in his faith and family, he is mature, studious, and just an-all around great kid. He is well liked by his teachers and his fellow students,” Teter said. “Even throughout this entire ‘circus’ that has followed him around, he has managed to balance everything and still keep things in perspective.

“His recruitment was a process like I have never seen in my years as a coach and AD, but luckily Immanuel has been grounded enough to get through it without it changing him and his values. A strong support system has certainly ensured that. He’s a smart, well rounded kid who just happens to be an exceptional basketball player.”

Kentucky coach John Calipari certainly sensed that immediately and made him the point guard priority in the 2018 recruiting class.

“I think they were able to build a good relationship outside of basketball,” Zito said. “I told him to make sure you really get to know the coaching staffs on a personal level outside of basketball. I think that stuck with him. Obviously coach Cal has every accolade you can think of, so that is the easy part of knowing him. But just getting to know coach Cal and rest of staff was important to him and his family and once they did, they really clicked.”

Kentucky showed it could be bigger threat than many had expected in the NCAA Tournament after knocking off Georgia, Alabama and Tennessee to win the SEC Tournament last week.

The Cats begin NCAA Tournament play Thursday in Boise — no real surprise that UK got placed there — against Davidson, a No. 12 seed. If UK, a five seed, wins it will play the Arizona- Buffalo winner on Saturday for a trip to the South Region semifinal in Atlanta.

While many Kentucky fans felt the Cats got a difficult draw with Arizona and No. 1 Virginia both looming at possible foes, UK players are more worried about continuing to play the way they did in St. Louis.

“Defense is the whole key. Coach Cal broke it down like that for us. We have got to play defense. No easy buckets. Simple. No trading buckets,” freshman point guard Quade Green said. “We learn that during practice. That’s what Cal wants. No trading buckets.

“Some games we have given up buckets but then we were also aggressive on offense. We can win either way now that you want to go. Everybody is synced in with their role now. We can beat you with offense or defense. That makes us a lot better and confident against anybody we play.”

Freshman Kevin Knox, like Green, has made a much bigger commitment to defense in recent games. Kentucky still needs his scoring, but he’s been more willing to play a more physical game in recent weeks.

“I know it is March and it is time to step it up. We have guys that had to step up and give energy. You have to put your body on the court and give all you’ve got now,” Knox said. “It’s in me. I can do that and show toughness and fight. I am going to keep that up.”

ESPN analyst Jay Bilas warned in November that Kentucky likely was not an elite team this year. He still believes Kentucky can beat most teams if it plays the way it has while winning seven of its last eight games. But he stresses that to keep playing now, Knox has to be the team’s star.

“He has to be consistently good throughout the course of the tournament,” Bilas said. “I don’t think they’re going to win at the highest level with him having just average games or just okay games. I think he’s got to be very good.

“Everybody has to play their best for them to advance to where they’re used to advancing as a program. This isn’t a vintage Kentucky team. It’s not as good as the team has been in the past. They’re still capable. This is a year where the best teams are the best because they’ve been consistent. That doesn’t mean they (the top seeds) can’t be beaten.”

Recently I wrote about the way then UK coach Tubby Smith stuck with Allen Edwards when he struggled during Kentucky’s 1998 national championship season much like John Calipari has with Hamidou Diallo this year.

That prompted Scott Padgett, a starter on that team and now the head coach at Samford, to explain why that was easy for Smith to do.

“The make up of the team made it easy to not make a change. Cameron Mills and Heshimu

Evans provided a huge lift for us when they came in off the bench,” Padgett said. “They also had no ego so they could play that role and not complain. Tubby would always go with the hot hand down the stretch of games.”

Sometimes I think I forget what it means to some student athletes to be part of the Kentucky athletics program.

North Laurel High School graduate Savannah Guzman, a UK junior, is a dance team member. She was a high school cheerleader and did studio dancing her whole life.

“It means everything to me to be part of Kentucky dance,” Guzman said. “This is a combination of everything I have worked for to get to this level and to be with such a prestigious group of girls and an amazing team. I am living it up. Third year on the team. Just keep trucking.”

Guzman says it’s hard for anyone not on the team to understand how much the team members respect and like each other.

“It’s part of what we bring in. This is the type of girls we want. That’s what we need as a team. To be a successful team, you need good, healthy attitude girls. When you have that, it creates a beautiful family and that’s what we have,” Guzman said.

During the SEC Tournament last week in St. Louis I met Kentucky fan Kelley Schweet of Lexington. She has been to 18 straight NCAA Tournaments, but I also learned she was in Bloomington, Indiana, in December of 2011 when the Hoosiers beat eventual national champion Kentucky to set off a court-storming melee that was scary for UK players, coaches and even media members.

Schweet was there because her daughters went to school at Indiana.

So what does she remember about that day?

“The first thing that came to mind was how rude the fans were, and I honestly feared for my well being and that of my daughters,” she said. “When the IU fans started storming the court, I told my daughter that Kentucky fans would never do that because we had been there before.

“Then I told her we had to get out of there fast. I even had my e-xhusband texting me and telling me to get out of the arena. Crazy! It was truly a scary situation, and I was in the nose bleed section.”

I remember being harassed by IU students going into the arena just because I was an out of town media member. Schweet had a similar experience.

“Before the game, I was heckled when I walked into bars, and the atmosphere was ugly towards UK fans,” she said.

Quote of the Week: “When we won I was speechless because nobody expected us to make it that far but we did. Then having Coach Calipari here to watch, I wasn’t really nervous but I also didn’t want to disappoint him at all,” University Heights junior KyKy Tandy said after UK coach John Calipari saw him score 33 points in a 2nd Region Tournament title game win. “I wasn’t even nervous but I didn’t want to disappoint him at all.”

Quote of the Week 2: “He needs to be on the field playing for us. He’s definitely one of our best 11. Just because we have some depth at outside backer, you don’t want him sitting there on the sidelines next to me,” UK coach Mark Stoops on why he’s moving sophomore Josh Paschal from linebacker to the defensive line.

Quote of the Week 3: “I have my lapel pin on, but that’s the only red thing that is going to ever touch my body,” former UK quarterback Freddie Maggard, a UK Radio Network football analyst, on wearing a red lapel pin while speaking at a Happy Heart luncheon.