No hiding from camo in school clothes 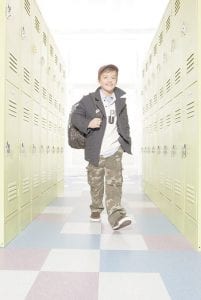 Camo has been growing in popularity for kids over the past few years, and that only increases as designers and manufacturers develop new color combinations — for boys and girls — and find new trendy places to put it, such as pant cuff s and bag straps. (AP Photo/The Children’s Place)

Camouflage is one thing you can’t hide from this back-toschool season.

The print has been growing in popularity for kids over the past few years, and that only increases as designers and manufacturers develop new color combinations — for boys and girls — and find new trendy places to put it, such as pant cuff s and bag straps. And camo cargo pants have gone from novelty to classic status.

But doesn’t that defeat the purpose of camo, which, in theory, should be flying under the radar?

“I think kids are seeing it from street fashion, more of a cool-kids point of view,” says Betsy Schumacher, senior vice president/chief merchandising officer for American Eagle’s 77 Kids. “It’s very savvy from a fashion standpoint. Kids gravitate toward things that feel real, and it feels like something easy to wear. … Our tag line is ‘long live fun.’ This trend is one kids can have fun with, and there’s something funny about a 6-month-old in army jacket, tutu and graphic T combination.”

Age appropriateness is easy to address in camouflage because, while sticking to the authentic pattern, the spirit conveyed by color, style and other embellishment makes it clear that children’s clothing isn’t trying to mimic modern military uniforms, says A.K. LaMonica, senior director of apparel at The Children’s Place.

“We don’t base it on current uniforms,” LaMonica says. “For our boys’ line, our inspiration truly comes from vintage.”

Boys’ shorts and pants most often get the camo treatment, and camo-covered baseball caps are the brand’s best-sellers. LaMonica says camo is the boys’ equivalent of, say, the embroidered butterfly for girls.

“We want boys to wear them with a solid shirt or a clean stripe. Boys are limited, but girls always have flowers, hearts, butterflies and whatever the trendy print of the season is. Boys don’t get that. They get plaid. Camouflage can be an alternative to that — and plaid isn’t that popular in shorts,” LaMonica says.

Brit-based brand Mini Boden says it has been successful translating camo for both sexes.

Girls usually get their camo with a splash of lilac or pink, boys like theirs brown or gray in the fall and winter, but like a bright blue in the spring or summer, says design director Emma Stevens. The pattern is a favorite on board shorts, soft twill trousers and an anorak jacket.

“We don’t want to imply a uniform at all. We use it just like a pattern, and it can look quite surfy, especially in sun-washed colors,” Stevens says.

“We try to do camouflage in a softer way, with more colors and increased scale. It looks less army and more fun. It’s a good choice for boys, who don’t have a lot of patterns to choose from … and it’s a nice option for the girl who’s not so girlie girlie,” says Stevens, who also designs the company’s teenoriented Johnnie B. line.

The look grows up into capris and miniskirts, among other silhouettes, for tween and teen girls, says Sonya Cosentini, style adviser for T.J. Maxx and Marshalls. It works for both the younger market and for the teen set.

“Camouflage is a print that you don’t always see on the shelves, but it’s a trend that makes it’s way back every year in a diff erent way. This year, that way is absolutely in the details, and we will continue to see that into the fall fashion season,” Cosentini says.

The print is a direct complement to the from-the-runway military look that’s hot this season in every market — from womenswear to infant clothes.

“Kids are really savvy from a fashion standpoint. When they see a trend on adults, they want it too. There’s no lag time,” says 77 Kids’ Schumacher. And, she added, unlike some adult trends, this one translates to childrenswear because comfort is at its heart.

There’s also an implied durability, and the back-to-school catalogs, for example, are full of camoclothed kids running, jumping and playing in the autumn leaves.

Mini Boden and especially Johnnie B. also are going big with pea coats and oilcloth military jackets, which look great with jeans, Stevens says. Those jackets, however, might be a little too much with camo.

Schumacher says children’s clothing has to appeal to two audiences: the kids who wear it and the moms who typically shell out the cash.

“Military works as a trend because of its classic heritage and comfort, and it’s understandable for both mom and kid,” she says. “If I think about a trend that would push us over the edge at 77 Kids because mom thought it was too old, it’s something we’d pass on. … We wouldn’t want to make mom uncomfortable.”

One other selling point to mom: Camo is pretty good at masking dirt and stains.