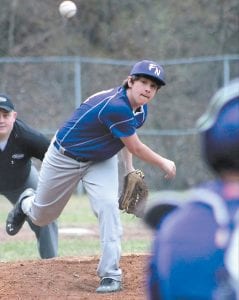 Eighth-grader Manny Gibson fires a pitch during his no-hitter against Wolfe County.

The Fleming-Neon Middle School baseball team entered play this week with a won-loss record of 5 and 3.

The Pirates opened the season with an 18-0 win over Wolfe County, with Manny Gibson pitching a no hitter for the win.

In the second game of the season, Fleming-Neon traveled to Leslie County and came away with a 17 to 3 win. Zack Cornett got the win.

Fleming-Neon then beat Knott County 7 to 5 at home to run the record to 3 and 0.

The Pirates suffered their first loss at new Harlan 9 to 0.

Fleming-Neon traveled to Shelby Valley and picked up their fourth win, 9 to 3. Manny Gibson got that win too.

The Pirates then suffered backto back tough losses against Letcher, 5 to 4, and Hazard, 11 to 8, to fall to 4 and 3. In the Hazard game the Pirates led 8 to 4 with two outs in the last inning but Hazard rallied to win.

Fleming-Neon got its fifth win against Shelby Valley at home, 7 to 1, with Zack Cornett notching the victory.

The Pirates are led by seven 8th graders. The roster is as follows:

The team’s head coach, in his second year, is Cobey Wright. He is assisted by Steven Caudill.