‘No one understands this back home’ 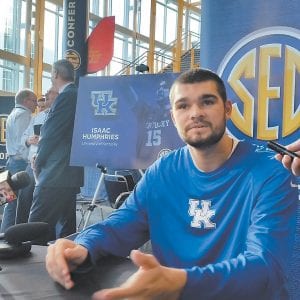 Isaac Humphries was surprised he got invited to SEC Media Day, but then decided he deserved to be there as much as anyone because of his offseason work and improvement. (Photo by Vicky Graff )

Rather than take a chance on delaying Isaac Humphries’s return from what has been described as a minor leg/knee issue, Kentucky coach John Calipari did not play his sophomore in last week’s Blue- White Game.

That is an indicator that Calipari believes Humphries is ready to make solid contributions to this team as freshman center Bam Adebayo’s backup.

“His swelling is gone, but I don’t want him to do something that makes it swell again,” Calipari said after the Blue-White Game. “Let’s get this thing totally cleared. It’s nothing spectacular. Obviously if there’s some swelling, there’s some issues that he’s got to deal with.”

Calipari did take Humphries along with Isaiah Briscoe to SEC Media Day in Nashville. Many thought he would take either Dominique Hawkins or Derek Willis, both seniors, with Briscoe.

Humphries admitted he was a “little surprised” to be picked but enjoyed his time with SEC media members.

“I have improved a lot and I am sick of doubting myself in that sense. I just got over it. I am pretty good now. Why wouldn’t he choose me to come down because I am doing pretty well. And people like my accent,” Humphries said.

Here’s more of what thoughts he shared at SEC Media Day.

Question: Is defense more of a focus this preseason?

Humphries: “For sure. We have really worked on our defense. Our offense, we have a system and know how to play. But defense, we like to rely on that.”

Question: What do you think of the freshmen?

Humphries: “It is obviously hard coming into Kentucky as a freshman. It takes time to get used to how crazy it really is. But once you are used to it and buy into everything it is all about, you don’t look back. They are handling it very well.”

Question: What does Bam Adebayo do best?

Humphries: “He is really good if he catches the ball on the post at getting to the basket no matter what. It’s hard to stop his back to the basket move. He’s really talented. He can knock down a shot every now and then. He is definitely working on that, too. We want to be well rounded and our system allows us to step out and shoot because we all can shoot.”

Question: Will shooting away from the basket be a strength for you?

Humphries: “Definitely. Shooting is such a confidence thing in a game. If you think it is going in, nine out of 10 times it will go in. I know last year when I was put into a game, I was always very hesitant to do anything. I know this year I will just be more confident to shoot. Mid-range shooting is a big part of my game. Obviously I am not going to be afraid to step out and shoot it because I know I can make shots.”

Question: How challenging is it mentally coming to UK because of the competition on the team?

Humphries: “It really tests you as a teammate to be honest. You are so used to being the guy on your team and here there are 10 or 12 guys all the same and just as talented. You have to work very hard for the playing time and recognition. Being able to become a better teammate from learning all that stuff is very important.”

Question: How do you answer that challenge on and off the court?

Humphries: “I am not one of those people who blames anyone else but myself. It’s me that is doing it. It is not anyone else’s fault. It just comes from me being independent growing up. Learning life lessons early. Moving out of home to play basketball at 14. I find myself very mature as an 18-year-old. I am just very realistic about the world and feel like blaming someone else for something you are not doing right is so unrealistic and I don’t know why someone would do that. You see it all the time, so I just try to be realistic.”

Question: Do you ever think about that you could still be a high school senior at 18 years old?

Humphries: “Yeah I do, but I definitely would not be the player I am yet at all. Last year I was developed some. It is weird to think of it like that but I am also lucky to be at Kentucky and be so young. Last year was a good year for me to learn and grow as a player. It was definitely a good year for me and now my sophomore year can be the productive year.”

Question: Do the high expectations for this team bother you?

Question: How was the flight from Lexington to Nashville for SEC Media Day with coach John Calipari?

Humphries: “It was okay. We were all squashed in a plane together. We just tried to talk about how it would be this year, who was doing well, how much the freshmen have developed and stuff like that.”

Question: Do family and friends in Australia understand what these media days are like for a Kentucky basketball player?

Humphries: “No. Even our professional teams don’t get stuff like this. They honestly don’t know much. I want my best friend to come over and experience it all with me but it is impossible. It’s just fun to have someone from home understand what is happening because it is such a crazy thing. It’s a lot of fun doing it, but no one understands this back home.”

Kentucky women’s basketball coach Matthew Mitchell once again was a bit at Big Blue Madness with his annual dance moves that even involved having former UK All-American Kyle Macy showing off a few moves from his younger days.

But what made this year special was that singer Kelly Clarkson tweeted that “I am officially in love with this coach” after seeing the video of Mitchell dancing to a Justin Timberlake song.

“I’ll have to let you know, that was a big moment, because I love Kelly Clarkson. She is the American Idol, and huge fan, and I wish I’d had more time to bask in that glow. We’ve been practicing hard and I haven’t really had time to process it. But for the record, huge Kelly Clarkson fan,” Mitchell said.

Count me as one who still thinks senior Dominique Hawkins could have a big impact on this year’s team backing up De’Aaron Fox, Malik Monk or Isaiah Briscoe. He had an impressive Blue-White Game after putting up some of the team’s best numbers in the combine for NBA scouts.

“Dom played phenomenal. I don’t think people expected that out of him. I kind of didn’t, but I’ve seen him play. When he gets hot, he gets hot and he just starts hitting from everywhere,” Fox said. “Floaters get going, 3-point shot gets going, midrange gets going. He starts getting up on defense. You just see everything.”

Monk says Hawkins can do the same things the other three guards can do even if that might surprise fans and UK opponents.

“Dom is going to be a solid player every time he gets on the court. He knows what to do. He knows his job. He does it every day. So we just expect a big role. He’ll knock down open shots and just do the right thing,” Monk said.

Calipari has been noncommittal on Hawkins’s role but admits he has one advantage.

“The advantage Dom has is he defends, he’s tough, he comes up with balls. He’s been in those games here,” the UK coach said.

If Kentucky goes on to get bowl eligible, a lot of credit will go to kicker Austin MacGinnis for nailing the 51-yard field goal as time expired to beat Mississippi State 40-38 last week.

But don’t forget the play of safety Marcus McWilson. That’s the senior safety coach Mark Stoops called out after three games and said he had to start playing better.

McWilson accepted the challenge and he’s doing exactly that. He had perhaps his best overall game at UK against Mississippi State with eight tackles, one tackle for loss and an interception he returned 45 yards for a touchdown.

“I studied film. I knew the routes that were coming and knew what I was going to get. I was able to make a play on the ball, get to the endzone and help our team get up,” McWilson said. “Again, excitement there was just crazy. I was caught up in the moment and loved it.”

So was Stoops. He basically tackled McWilson on the sideline as he went to congratulate the senior.

“I’m so happy for him. He doesn’t realize how much potential he has sometimes and that’s why I’m hardest on him,” Stoops said.

And he’s been tough on him from the time he came to UK as a highly-touted prospect from Ohio. He’s played but never quite to the level Stoops has wanted.

“I definitely had to accept the challenge myself and be the player he expected me to be,” McWilson said. “I had to hold myself to a higher standard and above the standard he even holds me to.

“They tell us that all the time that a coach is someone that takes you to a place that you cannot get to on your own. So as he pushes me, I push myself, and my teammates all push each other to keep it going.”

Still, not every college athlete can respond to the challenge/pressure like Mc- Wilson did and he played his best just when UK needed him most.

“Now I just want to build on this. I want to help us win more games,” McWilson said. “I’m grateful for this win, but now we’ve got to focus on next week.”

Don’t forget what receiver Jeff Badet did, too. Sure, he caught two touchdown passes but his biggest catch came on the game’s next to last play when he snared a 20-yard pass and went down immediately in the middle of the field. That let UK call timeout with :03 left to set up MacGinnis.

Stoops said he talked to Badet on Friday about him being ready for his chance.

“We needed him to stay the course, stay patient. We’ve had our struggles with throwing the ball but that opportunity was going to come and when it comes, you’d better make it and do it and he certainly did,” Stoops said.

Badet, a junior, admits he thinks a lot about playing in the NFL and knows he needs to show NFL personnel he can be productive and stay healthy.

“I am just riding along and playing football as long as I can and helping my team,” Badet said. “The next level is something I think about all the time. I am getting older

“I do think about the NFL but you can only control what is happening now. Whatever I am doing now, I can’t dictate the future. I just have to make sure I am doing all I can now so we can keep winning games and hopefully the dream I have of the next level will happen.”