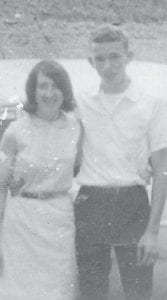 WEDDING ANNIVERSARY – Gerrard and Lynda Sexton Collins will celebrate their 39th wedding anniversary May 18. They were married in Clintwood, Va. He is the son of the late Charlie and Gladys Collins, formerly of Smoot Creek. She is the daughter of the late Bill and Berdie Sexton, formerly of Little Colley. They have a son, Harry Gerrard Collins of Van, and a granddaughter, Sarah, also of Van.