Jupiter, the largest planet in our solar system, is more than 10 times the size of Earth. Earlier this month, NASA revealed never-before-seen images of the giant planet, which is the fifth from the sun. NASA’s New Horizons spacecraft provided the views.

On Feb. 28, New Horizons came within 1.4 million miles of Jupiter. The spacecraft gave scientists closeups of Jupiter’s moons, its rings and a giant storm called “Little Red Spot.” The Earth-sized storm formed in 2000 after three smaller storms came together. It turned red in 2006. “This is our best look ever of a storm like this in its infancy,” says Hal Weaver, a New Horizons project scientist.

The space probe revealed other fascinating information about Jupiter. NASA scientists had seen images of Jupiter’s rings before. But moving images captured by New Horizons give astronomers a unique view of how the rings developed. “We’re starting to see that rings can evolve rapidly,” says NASA scientist Jeff Moore. “We’ve seen similar phenomena in the rings of Saturn.” 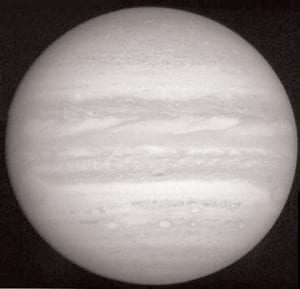 NASA This image of Jupiter is produced from photos taken by New Horizons.The telescopic camera snapped the images when the spacecraft was 18 million miles from Jupiter.

New Horizons also showed detailed pictures of Io, the smallest of Jupiter’s four large moons. Scientists think it might be the most volcanically active body in the solar system. The photos show what astronomers believe to be a volcanic plume rising hundreds of miles into space from Io. New Horizons cameras also revealed bright, glowing lava scattered across Io’s surface.

TO PLUTO AND BEYOND

New Horizons swung by Jupiter on its way to Pluto. NASA expects New Horizons to arrive at Pluto in July 2015. The spacecraft lifted off from Cape Canaveral Air Force Station, in Florida, on Jan. 19, 2006. Its mission: to explore Pluto; its moon, Charon; and beyond. Scientists hope to find out about Pluto’s atmosphere, its surface and much more.

The close encounter with Jupiter allowed scientists on Earth to test New Horizons. “The Jupiter flyby was a stress test of our spacecraft and team, and both passed with flying colors,” says Alan Stern, New Horizons’ principal investigator.

Scientists now have new insight into what to expect when New Horizons reaches Pluto. “We can run simulations and take test images of stars, and learn that things would probably work just fine at Pluto,” says John Spencer, a NASA scientist. “But having a planet to look at and lots of data to dig into tells us that the spacecraft and team can do all these amazing things.” – Claudia Atticot