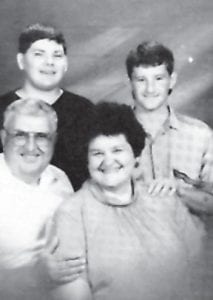 BANKS FAMILY — Jackson and Sandy Banks are pictured with their two sons, Jon David and Matthew.

grade. When she was in the third grade, she was affected by the Supreme Court’s decision “Brown v Board of Education”. She and the rest of her classmates were bused from their neighborhood elementary school to one across town that was predominately white. The purpose was to achieve integration as was required by the court’s decision. Only the third grade was moved and the move was only for one year. Sandy went on to attend nine other schools before graduating from David Mackenzie High School where she was nominated for membership in the National Honor Society and was a member of the French Club. Sandy ranked 89th in a graduating class of 503 students.

After graduation, she attended Morehead State University where she was a member of Chi Omega Sorority. She graduated in 1970 with a bachelor’s degree in history and political science. Both she and Jackson received master’s degrees in education from Morehead State University in 1973. Jackson later received a Rank I in administration from Morehead. Sandy received her Rank I in library science from Eastern Kentucky University in 1976.

Yearbook dedication: The staff of the 1998 Yellow Jacket takes great pleasure in dedicating the yearbook to Mrs. Sandra Banks. She has been the school’s librarian as well as a friend to teachers and students for 20 years.

She has been married to Jackson Banks, a former teacher at W. H. S., for 28 years. She has two children, Jon David and Matthew James. She is very active in the school having been a past president of both the Upper Kentucky River Education Association and the Letcher County Teachers Education Association. She has also sponsored the Beta Club, the Academic Team, and the D.E.A.R. Club. We would like to extend our appreciation for the dedication Mrs. Banks brings to our school.

In 1970, Sandy did her student teaching in social studies at W.H.S. under Gerald Frazier. She met Jackson while they were both raising money for the junior class. Sandy and Jackson were married August 8, 1970. While Jackson taught 30 years at W.H.S., Sandy began her teaching career at Fleming Neon High School. She taught social studies there from 1970 to 1978. In 1978 Sandy left Fleming for Whitesburg High School where she became librarian and served in that position for the next 27 years. During those years, she and Bruce Sexton co-sponsored the Beta Club and the Academic Team. From 1980-1990, Sandy taught U.S history at Southeast Community College. When Whitesburg High School closed in 2005, Sandy became one of the two librarians at the new Letcher County Central High School. She retired in 2008 having served in the Letcher County School System 38 years.