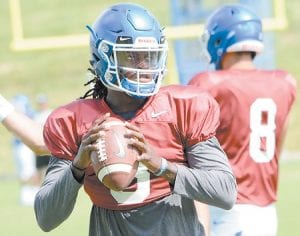 At first, Kentucky coach Mark Stoops said it wouldn’t be hard to make sure he didn’t use running back Benny Snell too much this season.

“He’s a hard guy to take off the field because he’s going to get you the tough yards. We always tell kids: Make us play you. If they (other running backs) are doing really good things, then we want to play them,” said Stoops. “He (Snell) doesn’t want to come out of the game. He wants to put the team on his shoulders and you love that mentality and that’s good with us.”

It has been very good for Kentucky. Snell led the SEC in rushing touchdowns (19) as a sophomore in 2017 and was third in rushing yardage (1,333 yards). He’s already seventh on the all-time UK rushing list with 2,424 yards and is the only player in school history to have consecutive 1,000- yard rushing season. He’s already scored a school-record 32 rushing touchdowns. He’s on preseason watch lists for the Maxwell Award (Player of the Year, Doak Walker Award (top running back) and Walter Camp Player of the Year.

Snell insists he’s not focused on the record, especially since many expect him to leave UK after this season to play in the NFL. He’s willing to play whatever role coach Mark Stoops has for him, and even hopes to be more active in the passing game this season.

“Whatever is best for the offense to keep the ball moving” is fine with him, he said. “No, I am not going to be okay with coming off the field. The Benny Snell mentality never changes. Know what I am saying? If they want me to carry 40 the ball 40 times, then I am doing it. Whatever they say, I am doing, though. I just want to win.”

“I love having him running the ball. I know if I give him a little hole, he’s going to hit it hard. He’s going to make me look good,” Stenberg said. “And I will make him look good sometimes if I can widen that hole a little extra. It’s a good tradeoff.”

Stenberg knows what to expect if he doesn’t get his block.

“If I don’t give him a hole, he will make one. He will lower the head and go straight through it. Sometimes I will get his head in my arm, or even my head, but that is just part of the game with Benny. He’s coming through whether you gave him a hole or not,” Stenberg said.

“He brings it like that every day. Weight room, indoor facility, outdoors. He is always ready.

I love it. It makes blocking easier. If you got someone who is not appreciative and doesn’t want to work, it’s like why am I blocking for this guy. Once you have somebody who wants to get better and improve the offense, it drives you to want to do the same. That’s why we love Benny.”

True freshman running back Kavosiey Smoke says it was “great” learning from Snell the past few months and the UK junior gave him plenty of easy advice to follow.

“He told me just to stay focused and not get down on yourself. Be a good teammate and work hard,” Smoke said. “He’s very humble. Keeps up with everything. That’s something I can relate to. He’s going to let you know if you don’t do something right and get on to you and tell you what to do to make you do right. You have to like and respect that because you see what he does and know he knows what he’s talking about.”

Remember former University of Kentucky basketball player Twany Beckham, a member of the 2012 national championship team after transferring from Mississippi State. He graduated with a 3.4 GPA and earned all-SEC academic honors.

He published a book (“Full Court Press — Conquering Adversity Under Pressure”) about his life story. He’s now Wellness Director for the Kentucky Employees’ Health Plan where he tries to improve the overall health and wellness of Kentucky state employees.

“The first book was a lot about life and my experiences through basketball at Mississippi State and Kentucky,” Beckham said. “This book is about life after college and the pressures you face with being a regular human being just going to work, paying your bills. There are a lot of things that challenge you that you really don’t think about until you get out in the real world.”

The Louisville native had his basketball career ended his senior year at UK. He woke up one morning with no feeling in his legs. He went to a few practices before finally telling the UK trainer what was wrong. An MRI found two herniated discs in his back and on Jan. 29, 2013 he had back surgery.

“You have got to work for everything. There are so many hurdles that you are not used to that you must adjust to in life,” Beckham said. “I found that out myself. So the book is just real life stuff you experience that I think can help people and I can’t wait until the book is ready for everybody to see.”

Think back to October when Southeastern Conference media members picked Tennessee to finish 13th in the SEC basketball standings last year. Instead, the Volunteers went 13-5 in SEC play to share the conference title with Auburn and finished 26-9 for coach Rick Barnes — who was a candidate for the head job at Kentucky before John Calipari arrived.

Now going into this season Tennessee is a consensus top 10 team — and even given a chance to win the national title. The Vols are being picked to finish second to UK in the SEC.

Give Barnes credit for upgrading his schedule, too. The Vols will play Gonzaga in December and also Louisville — and then likely Kansas if they beat Louisville in the preseason NIT during Thanksgiving week. They also have two games with Kentucky that could determine who wins the SEC title.

One part of the Kentucky offense that frustrated football fans last season was the lack of catches for tight end C.J. Conrad, who is ranked as the top tight end in the country by several NFL draft analysts.

He has 50 career catches for 697 yards and nine touchdowns and last year had 16 catches for four scores despite missing almost half the season with an injury.

“C.J. could have 80 catches every year if that is what we wanted to do,” Marrow said. “But he is such a good blocker. In pass protection he sacrifices catches for the team. I guarantee you he will have a lot more catches this year.”

“I can guarantee you that. Put that down,” Marrow said.

During the offseason UK coaches watched how the Philadelphia Eagles often used two tight ends at the same time last year when they won the Super Bowl. Kentucky could do a lot of the same thing this year.

“To do that, you have got to be able to run. You can’t just put two tight ends out there if they can’t run and both these guys can run. I think they are going to be weapons this year,” Marrow said. “That’s why I guarantee C.J. will have more catches.”

One of the most dramatic NCAA Tournament wins Kentucky has had came in 1978 when the Cats beat Michigan State 52-49 in the Mideast Region final to advance to the Final Four. That game sometimes gets overlooked but coach Joe Hall’s team used a daring adjustment by coach Leonard Hamilton right before the start of the second half that led to the win.

Kyle Macy, a transfer from Purdue playing in his first NCAA Tournament, had 18 points and played all 40 minutes without making a turnover against Michigan State’s 2-3 zone defense. The Spartans had a known star in Greg Kelser (19 points, 13 rebounds) and a rising star in Earvin “Magic” Johnson (6 points, 6 turnovers, 5 assists, 4 rebounds, 2 steals).

“We had Jack (Givens) guarding Magic and Jack was doing a great job because Magic really couldn’t shoot back then but we were having trouble scoring,” Macy said.

Kentucky, a high scoring team that season, trailed 27- 22 at halftime. The Cats were going through second-half warm-ups when Hamilton and Hall called Macy and Rick Robey over.

“It was kind of like in sandlot ball where you put chalk in your hands and just draw a play up on the court to run,” Macy said. “Coach Hamilton told coach Hall to run a play where we would reverse the ball, Rick would come up and set a pick and I would drive off the pick.

“If they came up to me, I would hit Jack. They didn’t want to give Jack open jumpers, so they stayed with him. I had open shots or they would foul me, so it worked out. I made some free throws down the stretch.”

Of course, two games later Givens had 41 points in the national title game win over Duke to show why Michigan State didn’t want to give him open shots, but Hamilton’s adjustment enabled Macy to get free enough to propel the Cats to a win and a national title.

Quote of the Week: “Any game, we want to play Kentucky. We’ve been talking about it, and I’m going to continue to talk to (John Calipari) about it. Because them, Duke and North Carolina, those are teams you want to play on national TV because it’s going to be watched.” — Memphis coach Penny Hardaway on what team he would like to play if TV gave him a choice of any opponent.

Quote of the Week 2: “I think they’re very long. I played against Karl-Anthony Towns and Willie Cauley- Stein, those guys. These guys are long, from one to five. That’s the difference. Even their wing players are very aggressive and they’re very long. They can get on the offensive glass and they really know how to move the ball.” — Former South Carolina and current Team Toronto player Duane Notice comparing the 2014-15 UK team to John Calipari’s current team.

Quote of the Week 3: “It’s definitely a favorite of mine for sure, but I don’t know if everybody in Alabama loves it. That and ‘The Shawshank Redemption’ are my two favorites.” — Kentucky offensive lineman Logan Stenberg on “Forrest Gump” being his favorite movie.