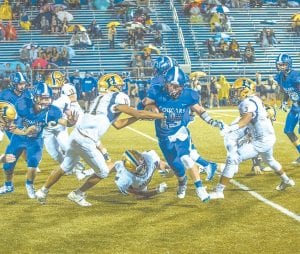 It was obvious at Kentucky’s Media Day that coach Mark Stoops was visibly upset when he announced that offensive line coach John Schlarman was dealing with a “serious” medical issue. Stoops didn’t disclose with the problem was, but an educated guess was cancer based on the coach’s reaction and that Schlarman at the time was still working.

Finally last week Stoops revealed that Schlarman was now undergoing chemotherapy treatments. Remarkably, he’s still coached EVERY day and was on the sideline coaching Saturday when UK opened the season with a 35-20 win over Central Michigan.

For any one who has even been through chemotherapy or had a loved one undergo chemotherapy, it’s almost impossible to fathom that Schlarman can keep maintaining that workload.

“The thing that is even more amazing to me is his attitude. He has unbelievable positivity,” said Troy coach Neal Brown, who has known Schlarman for 20 years and worked with him at Troy and UK. “I am not surprised at all that he’s continuing to coach. It’s impressive he’s doing that, but not surprising he’s coaching or working at a high level. That’s just John.

“He’s one of the best people I have ever been around. He’s one of my best friends. I’m not surprised by the toughness he’s shown. He’s just been that way his whole life. But his attitude … even now he’s staying so positive. He’s just an inspiration.”

Stoops admitted he’s keeping a close eye on Schlarman because “his family and his health” matters more than anything else.

“And he knows that. We’ve had conversations along the way, every step of the way. I’m probably more cautious than he wants to be because I think he wants to live a normal life and fortunately for him, he’s been responding very well to the medicine and you don’t know how that’s going to go,” said Stoops. “That’s what I do talk to him about because our season, it beats you down. We’re in here seven days a week all day and night and I don’t want that to affect his health. You do have to manage that. He knows that.”

Stoops said he has “forced” Schlarman to go home to get a “little bit of rest, sleep” but that he basically “hasn’t missed a beat” with his coaching workload. That includes not having his recruiting responsibilities changed, either.

Those who know Schlarman best are not surprised he’s continuing to work the way he has. Chances are working and maintaining a normal schedule — if he can do that physically — is the best thing for Schlarman, who played at UK and was always known as a fierce, intense competitor.

“I’ve been able to maybe not sit around and worry about things all daggone day. I can just go to work and do what I would do on a normal, regular basis. I think that’s refreshing, mentally,” the UK offensive line coach said.

Schlarman praised Stoops for allowing him to continue to work and be part of the team while he’s undergoing treatment.

“Coach Stoops, I couldn’t work for a better head coach in America because he’s put family first all the time,” Schlarman said. “That’s easy to say in the recruiting process and side talk, but he’s done that. He’s been an unbelievable boss and allowed our family to deal with this in the way that we need to but also allowed me to continue to work, which is important to me.

“It’s really important to me to do the job that I’m here to do. So that’s something that really motivates me every day, and I want to keep doing that for as long as I can do that, and hopefully that’s a long, long time.”

Family is important to Stoops. He encourages coaches to have their families at dinner after practice one night each week to make sure the coaches get to see their wives and children. It’s also not unusual to see a coach with his children during the pregame Cat Walk.

Schlarman said his doctors — both in Lexington and Houston — have been “phenomenal” and that he’s actually feeling better than he did in mid-June before he started his treatments (the type of cancer has not been mentioned).

Schlarman’s players have talked about his courage and how he’s told them to worry about football, not him.

Schlarman appreciates the support his players have shown him. He says that’s an indication of what type players Kentucky has recruited.

“It shows that we’re recruiting the right type of guys, and I’m really excited to coach them and go through this season with them and get after it,” Schlarman said.

Stoops knows the way Schlarman is handling his issue is an inspiration not only to the linemen but to every Kentucky player — or should be.

“How can you be a player out there feeling sorry for yourself when you have a man that’s just gone through five, six hours of chemo and is sitting out there on the practice field coaching the same way he does every day?That’s pretty inspirational to me, and I would assume to the players as well,” Stoops said.

Pretty inspirational to me — and I am guessing to you — as well.

When Dontaie Allen took an unofficial visit to Kentucky that resulted in the Pendleton County star getting the scholarship offer he quickly accepted, he got to work out with two former UK stars — Darius Miller and Randolph Morris — and watch the current players practice twice.

“Darius was one of his heroes growing up. He’s from our region (Miller played at Mason County) and everybody knows about him and what he did at UK and now in the NBA,” Pendleton County coach Keaton Belcher said.

Belcher played college basketball at Belmont University in Nashville and helped the Bruins reach the NCAA Tournament in 2006, 2007 and 2008. He was team captain his senior year and played in a school record 131 games,

He finished his career with 856 points, 396 rebounds and 91 assists. He was also a career 35 percent shooter from 3-point range.

One of his Belmont teammates was Ian Clark, who averaged 14.9 points per game Belcher’s senior season in 2009-10. He now plays for the New Orleans Pelicans with former UK star Anthony Davis.

“Dontaie is farther along now than Ian Clark was at the same time. That’s another reason I think Dontaie can eventually play in the NBA,” Belcher said. “He can score at every level. I have not really seen anybody yet shut Dontaie down. He’s a guy that is afraid to fail and he puts in the work to succeed.”

Allen figures to be one of the leading candidates for Mr. Basketball honors, and signing with Kentucky in November certainly will enhance his chances. Belcher has also upgraded Pendleton’s schedule to give him more exposure in the state.

“I would be lying if I said we had not mentioned that before,” Belcher said. “Mr. Basketball is something we are shooting for but because you commit to Kentucky is not a guarantee to win the award. You have still got to produce. Last year he was a consensus first-team all-state player but you still have to produce this year.”

Could this be the year that Kentucky finally ends that losing streak against Florida? Kentucky has not beaten Florida since 1987 despite having several great opportunities to do so. Remember last year when not once, but twice, Kentucky left a receiver uncovered inside the red zone when Florida rallied to win at Kroger Field?

The next closest current streak? Alabama over Vanderbilt, 22 straight times.

To ever gain respect as a legitimate football team, Kentucky has to be able to beat Florida, but just don’t count me as one who thinks that will happen Saturday in the Swamp.

Kentucky junior running back Benny Snell’s “outgoing personality” is what his mother calls a “mixture” of her personality and her husband’s personality.

“On the field he is stone faced and working to get things done,” April Snell said. “You can’t smile on the field when you are busy making plays. Off the field, he’s very lovable. If you hear him laugh, he’s got one of the best laughs ever. He has a really good smile, too. I have a pretty good laugh, but not as good as Benny.

“He has never met a stranger. Anyone can walk up to him and say hello, and he will say hello back. He will sign anything you ask him to sign. He’s very appreciative of BBN (Big Blue Nation) and all the love he has received.”

She wasn’t surprised when her son said he believed he was the best running back in the Southeastern Conference even if Alabama’s Damien Harris is rated higher.

“Benny is very confident. You don’t want to take his confidence in football for cockiness,” Snell’s mother said. “He has earned what he has got through blood, sweat and tears. He just speaks the truth. I agree he’s the best at what he does. He will show again he is the best running back in the SEC.”

He ran for 125 yards and two scores on 20 carries, including a 52-yard touchdown run, in the 35-20 win over Central Michigan. But his roommate, sophomore A.J. Rose, gained 104 yards on eight carries and had a 55-yard scoring run.

“Rose hits the hole in stride and just takes off with it,” former UK running back Anthony White said. “Benny is more powerful. He waits for contact and then makes decisions. A.J. can hit the hole in stride because that’s his style, something we have not seen in a while at UK.

“It’s going to be a great combination all year with those two. Just line up and run the ball could be what UK needs to do a lot because of how good they are.”

However, many disgruntled fans were not buying in. One was Mark Perkins of Morehead, a long-time UK fan who no longer has UK football season tickets.

“When I got my season ticket renewal before the first season after renovations (at then Commonwealth Stadium) under parking instead of blue lot form it said TBD (to be determined),” Perkins said.

“I called the ticket office. I was informed I’d be assigned to a parking garage. I asked why and was told they needed those parking passes for the new suites built on press box side of the stadium. I said no thanks,” Perkins said.

He had been a UK football season ticket holder for 31 years but when he lost his blue lot parking pass, he gave the tickets up and vows he’ll not be back at Kroger Field.

Quote of the Week: “He all about business. No negativity, always positive, on a mission to reach his dream goal to make it to the NBA. I just want him surrounded by positivity, by people who can help get him where he wants to be and he knew Kentucky was that place for him,” Chanel Tillmon on her son, UK basketball commit Kahlil Whitney.

Quote of the Week 2: “Just want to thank everyone for the prayers and concerns. The Lord has a plan for me and sometimes that means obstacles in my path. I know my team will be fine and still do amazing things this year. I will be working hard to come back even stronger next year,” UK offensive tackle Landon Young on Twitter after his seasonending knee injury before the season opener.

Is Juzang as tough as Calipari thought?5 Wildcats may test NBALook at Jordan’s last title will start April 19 on ESPN