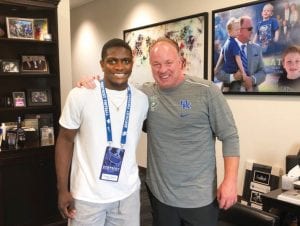 He might have to wait his turn for a chance to play at Kentucky, but perhaps the most under appreciated Kentucky football signee by UK fans was Georgia running back Travis Tisdale.

The 5-9, 165-pound Tisdale is a four-star recruit from Lowndes High School in Valdosta, Georgia. ESPN rated him as one of the nation’s top 300 players and had him at the No. 18 running back nationally. Rivals.com rated him as the No. 11 all-purpose back nationally. He led Class 7-A with 1,903 yards rushing and 21 touchdowns on 217 carries as a senior before picking UK over Penn State, Nebraska, Ole Miss and others.

“He’s an aggressive runner. He makes contact with defenders and uses his strength to gain additional yards,” said Shane Thomas of the Valdosta Daily Times. “He’s also accepting of taking on multiple roles. He played defensive back his senior season at Lowndes and was a return specialist also.”

He caught 14 passes for 130 yards last season, returned two kickoffs for touchdowns and had 21 tackles as a corner back. He finished his career with 45 rushing touchdowns, the best ever at Lowndes High School. 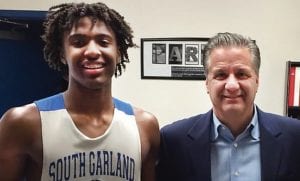 Denyse Maxey felt like University of Kentucky coach John Calipari “would take care” of her son, Tyrese, and was “sincere” during the recruiting process. “He never lied to us. He is not always going to be easy on him and he told us that. He didn’t make the promises or say some of the things other coaches did to make us feel good. In our opinion, he was honest.”

Tisdale told Thomas on signing day that he thought playing against a “lot of big-time players” in the SEC who eventually go to the NFL would be good for him. He also said he knows he needs to gain weight, which is one reason Thomas believes a redshirt year would benefit Tisdale.

Thomas wasn’t surprised Kentucky was able to sign Tisdale because of the “positive reaction” he had to UK coach Mark Stoops.

“He’s one of those players every coach wants. He has a positive attitude and remarkable work ethic. He’s friendly, respectful, a great student, and has a personality everyone wants to be around,” Thomas said. “As a player, he’s someone who can break free for a touchdown at any moment. If people get to know him a little bit, they’ll like his personality. He has a great smile to complement his personality.”

He will also be able to learn next year from junior running back A.J. Rose and redshirt freshmen Kavosiey Smoke and Chris Rodriguez.

“We felt very good with Chris and Kavosiey and A.J. going into the year. You heard me talk about it throughout the year, we really wanted to see those guys, but when you have Benny (Snell) and A.J., it’s hard to get to those guys,” Stoops said. “But Kavosiey and Chris, when you did see them you saw the talent that was there and the maturity and how physical they are. They’ve got some speed. So definitely felt like we could just go with one running back at this point in this class.”

Especially when that one is a four-star player as physical, fast and versatile as Tisdale.

“He (Tisdale) rings just a little bit something different,” UK offensive coordinator Eddie Gran said. “This guy’s a track guy. He’s probably a 10.6 (second in the 100-meter dash) kid. Reminds you a little bit of a Boom Williams home run-type hitter. I think you put him in that (running backs) room with A.J., Kavosiey and Chris and you have four dynamic running backs that are really going to be fun to work with this fall.”

Kentucky signee Tyrese Maxey’s mother, Denyse, said there was one thing about UK coach John Calipari that really impressed her.

“We felt like the time we had spent with Cal, he was sincere. For me to even consider letting my 17 year old go to Cal is huge. I am such a Mama Bear,” she said. “I felt like Cal would take care of him.

“He never lied to us. He is not always going to be easy on him and he told us that. He didn’t make the promises or say some of the things other coaches did to make us feel good.

“In our opinion, he was honest. He said he would be hard on him and get on him. Cal said there would be times our son might hit a brick wall from time to time. That is kind of person I want to grow my son into the next stage of life. We did not want him to just grow as player, but also as a man. We just felt comfortable with him.”

Denise Maxey also said there is one other thing about her son that should help him at Kentucky.

“Tyrese loves the spotlight. The bigger the stage, the more he wants to perform,” she said. “He has always shined on the biggest stages. I always ask him if he gets nervous and he’ll say, ‘Mom, it’s just basketball.’ He just seems to enjoy and embrace any situation. I think Kentucky fans will really like him.”

Tyrese Maxey played three games at Marshall County at the Kentucky Lake Showcase last weekend and his father, Tyrone, was impressed with everything about the event.

“What a great facility for basketball,” Tyrone Maxey, the player’s father and an assistant coach on the team, said. “We were really appreciative of the offer to just get to play in Kentucky. Kentucky fans have been great from the day Tyrese committed to Kentucky and to get to play in the state where he’ll be playing next year was special.”

Football recruiting coordinator Vince Marrow can’t help but get a little emotional when he thinks about the players Kentucky is losing off this year’s team that did so many things UK fans are going to remember for a long, long time.

Some of the seniors were signed in 2014 and redshirted a year. The other seniors were part of the 2015 signing class that Marrow predicted four years ago could help make UK football special.

“You’re talking about Mike Edwards, Darius West, even though he gets criticized a little bit, but Dorian Baker has really won some really big games for us here. I can go down the line with Josh Allen, C.J. Conrad, George Asafo-Adjei, Bunchy Stallings, all five of the defensive backs,” Marrow said. “These were guys that we said we’re going to win some games with, and you start seeing it immediately with the ’15 class in their true freshman year.

“Here’s another thing, they were true four-year seniors, I’m talking about the ’15 class, so we did look at it and say we can do really do some damage with these guys and win some games. Now, I knew we were close to beating Florida. I thought we should have done it in ’14 when we got robbed down there, and then I thought we should have done it the next year when they came here, but then we took a back when we went down there and got our teeth kicked in.

“What he was trying to say was that it ain’t these pipsqueaks coming out there no more, guys that don’t look like SEC players,” Marrow said. “We knew in ’14 or ’15 that would be the class that we said we should win the East. The vision, that was hard, but we did it.”

Those players helped UK have three straight winning seasons and go to three straight bowl games. They’ll also be remembered as the team that ended the 31-year losing streak to Florida — by winning at Florida.

Chasity Patterson, a 2017 McDonald’s All-American who scored 3,177 points in her career at North Shore High School in Houston where her teams won 125 games, gave UK women’s coach Matthew Mitchell a big addition for next year when she transferred from Texas to UK.

Patterson, who won the 3-point contest at the McDonald’s All-American Game in 2017, was the top-ranked point guard in the 2017 recruiting class but averaged just 2.8 points and 7.6 minutes per game her freshman year at Texas. She played in one game this season and scored six points in nine minutes.

“She’s a player that I got to know when she was in high school. We recruited her, and we got to know her and her family, so there was some familiarity there, a prior relationship, so I think that helped her feel comfortable,” Mitchell said. “She and her family are high-character people. That’s important to us, and we just love the way she handles herself.

“She’s very quick, very fast, very athletic, can use her speed as a great weapon, and we value speed. We love players that have speed. She can handle the ball well. She can get to the rim for a quick guard. She’s got a nice pullup. She can make the 3.

“She certainly has some room to grow. Good student, good person, good player, good fit for our program.”

Patterson can practice this semester but will not be eligible to play until the second semester of the 2019-20 season.

“We are extremely excited to welcome Chasity Patterson to our program and cannot wait to get her on campus,” UK head coach Matthew Mitchell said. “Chasity is an athletic guard with incredible play-making abilities on both ends of the court. She’s a high-energy player who possesses a winning pedigree having won 125 games in high school.

Just in case you are looking ahead and thinking about making plans for Kentucky’s 2019 football season, the Wildcats will have eight home games — four Southeastern Conference games and four non-conference matchups.

Also in case you are interested UK’s non-conference opponents in 2020 will be Eastern Michigan, Kent State, Eastern Illinois and Louisville while in 2021 the opponents will be Louisiana- Monroe, Akron, Chattanooga and Louisville.

Quote of the Week: “We are working folks and do not know about NBA life. We are trying to learn what we can. We just have a kid who has a dream and wants to pursue it but at times just thinking about it scares me,” UK signee Tyrese Maxey’s mother, Denyse, on a possible NBA career for her son.

Quote of the Week 2: “I do feel like at this point I know what I am doing and can almost self correct my mistakes because the coaches have taught me so much. I can remember as a freshman thinking the seniors were so much older, but now as a senior I do not feel that old,” Kentucky catcher Jenny Schapper on looking ahead to her senior season.

Quote of the Week 3: “We’re a better football team when he is on the field, because he’s the best slot guy we have. Until somebody can jump up and beat him out of that spot, he needs to be in there making plays for us, hopefully, for years to come,” Green Bay quarterback Aaron Rodgers on former UK star Randall Cobb.