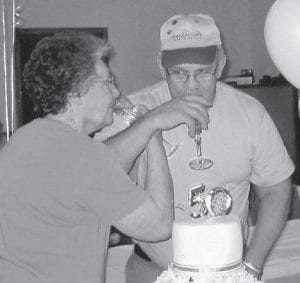 GOLDEN ANNIVERSARY – Pearl and Charles Noble were guests of honor at a surprise party in honor of their 50th wedding anniversary.

Pearl and Charles Noble of Craft’s Colly were surprised February 2 at the Sandlick Fire Department with a party honoring their 50th wedding anniversary.

The couple’s family got together and through the Internet and phone calls planned the surprise celebration. The story that brought the Nobles to the fire department was that they were going to a birthday celebration for Kim Pennington Lucas, their niece.

Everyone arrived about 5:15 p.m. for the 6 p.m. party and signed the guest book before being seated and briefed on the night’s events. Eighty-seven family and friends attended.

When Pearl and Charles Noble arrived at the fire department, they had no idea the event was in their honor. They also did not know that their daughter, Jennifer Holbrook, had driven 12 hours from Missouri to attend, while their son, Chuck Noble, had come from Bowling Green.

The couple’s children spent the night in a hotel in Whitesburg and decorated the fire department the morning of the party. They expressed appreciation to The Master’s Harmony, who performed at the party, to Kristy Richardson for making the cakes, and to the Sandlick Fire Department.