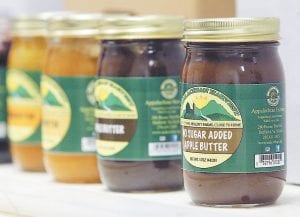 Product sits on a shelf during a tour of the Appalachian Harvest facility in Duffield, Va. Appalachian Harvest has grown to a $1.5 million business that derives only a sliver of its budget from grants while delivering vegetables to grocers including Food City, Whole Foods, and Ingles. (AP Photo/Wade Payne)

In a warehouse in Virginia’s southwestern tip, a forklift stacks crates of cabbages and preserves onto a truck bound for a big-name grocer.

Even in the lull before growing season, it’s a busy day at Appalachian Harvest, a 15-year-old nonprofit that’s a standout success in a distressed region where economic development efforts come and go.

The Virginia-based nonprofit organization has grown to a $1.5 million business that derives only a sliver of its budget from grants while helping farmers in remote areas sell produce to Whole Foods and other grocers. To develop its business from scratch, Appalachian Harvest has fine-tuned how it helps farmers while expanding from organic to conventional crops and learning a crash-course in trucking.

For decades, economic development has been an important but difficult goal in a region where farmers have faced the decline of tobacco and communities have seen mining and industrial jobs dwindle. Increasingly, Appalachian entrepreneurs are com- bining charitable goals with the discipline needed to make money off goods and services. 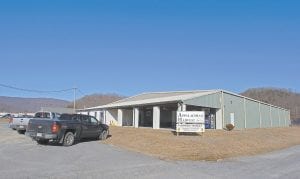 Appalachian Harvest is considered a pioneer of this model for helping small farms pool produce into tractor-trailer loads for brokers and chains that include Food City, which has a store in Whitesburg and elsewhere in Kentucky, Virginia and Tennessee, and North Carolina-based Ingles.

“They help anywhere they can,” said Josh Watson, a 30-year-old farmer in Surry County, North Carolina, who has sold through Appalachian Harvest for three years. “They do classes on food safety regulations, and if you had a problem with anything, they can find you an answer.”

Inside Appalachian Harvest’s 15,000 square-foot warehouse are massive coolers and packing equipment, including a 30- foot green conveyor belt-driven machine that cleans and dries vegetables. In the summer, the warehouse is full of farmers adding the brand’s green and yellow labels to produce, often late into the night. 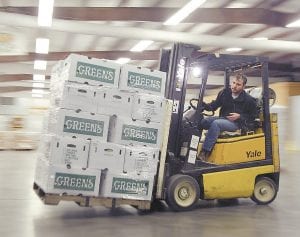 Chris Davis loads product into a waiting truck at the Appalachian Harvest facility in Duffield, Va. Appalachian Harvest has grown to a $1.5 million business that derives only a sliver of its budget from grants while delivering vegetables to grocers including Food City, Ingles and Whole Foods. (AP Photo/Wade Payne)

During the winter, general manager Robin Robbins receives projections from grocers, calculates how many plants are needed and helps farmers phase their planting and harvesting. It sells produce from as many as 60 farmers.

“You don’t need 500 peppers all in one week. You need so many every week,” Robbins said. “When you call us in July for tomatoes, we had to know in December to order the seeds, get the transplants, get the ground ready.”

Appalachian Harvest generated 86 percent of its 2014 budget from sales, said Kathlyn Terry, the head of its parent organization Appalachian Sustainable Development. She hopes to be more self-sufficient this year because two new trucks should reduce maintenance costs.

Appalachian Harvest started in 2000 to help farmers learn to grow organic vegetables as the government phased out price and production controls for tobacco. Early on, the business shut down for several months when the local growing season ended.

Now, to keep its trucks running in the winter, the organization also works with farmers outside of Appalachia. It decided to expand several years ago from organic to conventionally grown produce, which now makes up two-thirds of what it sells.

They’ve also gotten smart about trucking, with routes that include grocery hubs in Maryland and Georgia. When one of its trucks drops off vegetables it often returns with products for distribution centers nearby, ranging from baby formula to dog food. Terry estimated that the backhauling makes up 10 percent of their revenue.

Input from grocers and other experts several years ago helped the charity streamline, including shifting the packing of vegetables to farmers. Its training budget — about $100,000 per year funded by grants — was also moved onto the books of Appalachian Sustainable Development, Terry said.

“Our expenses were just so far out of whack,” she said. “We had to make some adjustments.”

The moves paid off, and Terry was invited to speak at a late 2014 seminar on self-sustaining nonprofit ventures.

One of the seminar’s leaders, Paul Wright of the Kentucky-based Mountain Association for Community Economic Development, said social enterprises must have business discipline but they don’t necessarily need to break even if donors are willing to invest in their impact.

Wright said that Appalachian Harvest has had exceptional success for a nonprofit: “They would represent the top, cream of the crop.”

At the warehouse, Robbins appears visibly excited as the forklift loads the last pallet on the truck, saying the sight of a full tractortrailer always makes her happy.

This past winter, Appalachian Harvest developed blackberry butter, peach salsa, pickled baby beets and other jarred products. The truck is taking a shipment for a test-run at Ingles.

Robbins, who comes from a family of tobacco farmers, sees the preserves as another way for farmers to make money in a tough business.

“We’re all in it together,” she says.