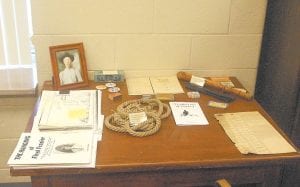 Letcher Circuit Clerk Mike Watts has laid items stored in the clerk’s office for more than 100 years on a table in his office for viewing. A picture of Floyd Frazier, records of his trial, and the rope used to hang him are among the items, along with a billy club used as evidence in a police brutality trial and a sample ballot from the 1956 General Election. The hangman’s noose that had been tied in the rope is missing.

When Mike Watts took office at Letcher Circuit Clerk at the first of the year, he also took possession of part of Letcher County’s history, and found that one macabre part of it is missing.

The circuit clerk has for 110 years been the custodian of the hangman’s noose used in the only legal hanging ever held in Letcher County, when Floyd Frazier was put to death on College Hill for the murder of Ellen Flanary.

But when Watts took office, he said a piece of rope was still there, but the noose has mysteriously disappeared.

“It’s terrible to steal a piece of our history,” Watts said.

Watts said outgoing clerk Larry Adams said the noose wasn’t there when he took office. Longtime clerk Margaret Nichols said to the best of her knowledge, the noose was there when she took office, and when she left, and the rope had been stored on a bookshelf in her office where a casual visitor couldn’t pick it up.

Watts said he remembered from the 1980s that the noose was on the rope when it was kept in a glass case in the old law library, which was taken out and added to the clerk’s office space when the courthouse was renovated in 1999.

“People kept asking me for a piece off of it, and I always told them, ‘No, there’s not much left of it,’” Nichols said.

According to family members of officials who participated in the ex- ecution, pieces of the rope were cut off then and given to the officials after the hanging. Some have said they still have them, handed down over generations.

In addition to the rope, the clerk’s office has a booklet with pictures from the day of the hanging and the text of a Mountain Eagle story and editorial about it, transcripts of one of the three Frazier trials, a wooden billy club and slapjack that were evidence in the case of a police officer convicted of excessive force, and assorted other evidence, the significance of which has been long forgotten.