Northeast Ohio is expected to have plenty of rain 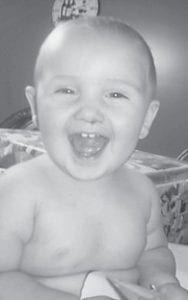 FIRST BIRTHDAY — Camden Joel Slone turned one year old on August 13. He celebrated his birthday with Elmo and lots of family. He is the son of Casey and Robby Slone of Pippa Passes. His grandparents are Joe and Tammy Fields of Smoot Creek, Tammy Adams of Isom, and Laurita and Leo Slone of Pippa Passes.

Howdy friends and neighbors, hope this finds everyone well and enjoying whatever kind of weather you might be having. We’ve had a cold wind blowing all day, the forecast for earlier in the week was for heavy rains and ferocious winds. Guess what place only saw a few drops, yep, Lorain. All we got was bad winds then coolness. My poor mustard patch could sure enough use a good long, soaking rain.

I had a good but sad day Sunday. Bill and I went to Cincinnati to visit with Sarah Belle, who is in a nursing home, which was the sad part. The good part was getting to see and talk with Sarah, and all four sisters were together. Anna Lea came up from Whitesburg and Christy brought Jeanie from Louisville. So Sarah got to see her three sisters and a niece and two nephews besides Christy and Bill. Anna’s son Bobby Goins and wife Valerie came up from Bedford. I didn’t get to see them as Bill and I were already on our way home. I really would have liked seeing them; it’s been a long, long time. 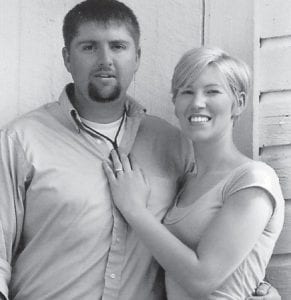 TO BE WED — Ricky and Sherry Lucas of Cowan, announce the forthcoming marriage of their daughter, Jeana Lucas of Cowan, and Chris Holbrook, son of Charles and Vicki Holbrook of Payne Gap. The wedding will take place at 5:30 p.m., Saturday, September 18, at Faith Community Church in Whitesburg. The custom of an open wedding will be observed and friends and family are welcome to attend. Both the bride-elect and the bridegroom-elect were graduated from Southeast Community College and are physical therapist assistants. The couple will reside at Payne Gap.

Anna Lea, Jeanie, Christy, Bill and I all went to Perkins for a late lunch before Bill and I left. I would have liked to have taken Sarah, but she just wasn’t able.

Richard and Georgia went to Penfield to help Bob and Patty (Bentley) Sergent celebrate their 50th anniversary, hosted by their three daughters. There were visitors from Florida, Ann (Sergent) Lyons, who was married to their son, the late Bobby Wayne, and from Letcher County were Harvey and Emma Jean Bentley. Harvey is a brother to Patty, and Sissie, as we always called her, is Bob’s sister. Also from Letcher County were Lavinia Farley and her daughter DeLee.

Congratulations Bob and Patty, and we’re wishing you many more years together.

I just peeled apples and put them on to cook, and am going to have to make a stack cake tomorrow for Saturday’s picnic. You wouldn’t believe what a sore, stiff, achy hand I now have. Oh well, guess I’ll live.

I sure thought Red was feeling much better after a rough week, and he did have a couple of fairly decent days but today sure isn’t one of them.

What a surprise! Catharine had today off and is here early so I have to get busy and finish this.

So in closing, I’m wishing all a great week and a blessed weekend. I’m hoping to get to go to the Letcher County picnic Saturday, and hope we have a good crowd. I’m sure there will be lots of good food.

You all be good, share a smile, love and prayers.