Noses, ears made in lab 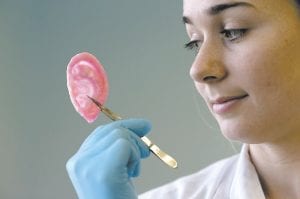 Dr. Michelle Griffin, a plastic research fellow, posed for photographs with a synthetic polymer ear at her research facility in the Royal Free Hospital in London. (AP Photo)

In a north London hospital, scientists are growing noses, ears and blood vessels in a bold attempt to make body parts in the laboratory.

It’s far from the only lab in the world that is pursuing the futuristic idea of growing organs for transplant. But the London work was showcased April 8 as Mayor Boris Johnson announced a plan to attract more labs to do cutting-edge health and science research in the area.

While only a handful of patients have received the British lab-made organs so far— including tear ducts, blood vessels and windpipes — researchers hope they will soon be able to transplant more types of body parts into patients, including what would be the world’s first nose made partly from stem cells.

“It’s like making a cake,” said Alexander Seifalian at University College London, the scientist leading the effort. “We just use a different kind of oven.”

British authorities have invested nearly 4 million pounds ($6.7 million) in the plan to stimulate research in the London-Oxford-Cambridge area. It aims to attract companies to the area to foster collaboration and promote research and manufacturing. A major center for biological research will open in London next year.

University College London is a partner in the campaign. During a recent visit to his lab there, Seifalian showed off a sophisticated machine used to make molds from a polymer material for various organs.

Last year, he and his team used that material to mold a nose for a British man who lost his to cancer. Then they added a salt and sugar solution to the mold to mimic the somewhat sponge-like texture of a natural nose. Stem cells were taken from the patient’s fat and grown in the lab for two weeks before being used to cover the nose scaffold. Later, the nose was implanted into the man’s forearm so that skin would grow to cover it.

Seifalian said he and his team are waiting for approval from regulatory authorities to transfer the nose onto the patient’s face but couldn’t say when that might happen.

The polymer material Seifalian uses for his organ scaffolds has been patented and he’s also applied for patents for their blood vessels, tear ducts and windpipes. He and his team are creating other organs including coronary arteries and ears. Later this year, a trial is scheduled to start in India and London to test lab-made ears for people born without them.

“Ears are harder to make than noses because you have to get all the contours right and the skin is pulled tight so you see its entire structure,” said Dr. Michelle Griffin, a plastic surgeon who has made dozens of ears and noses in Seifalian’s lab.

“At the moment, children who need new ears have to go through a really invasive procedure involving taking cartilage from their ribs,” Griffin said. She added they plan to eventually create an entirely synthetic face but must first prove their polymer scaffolds won’t accidentally burst out of the skin.

“Scientists have to get things like noses and ears right before we can move onto something like a kidney, lungs or a liver, which is much more complicated,” said Eileen Gentleman, a stem cell expert at King’s College London, who is not involved in Seifalian’s research. “What (Seifalian) has created is the correct structure and the fact that it’s good enough for his patients to have a functional (windpipe), tear duct, etc. is pretty amazing,” she said.

Some scientists predicted certain lab-made organs will soon cease to be experimental.

“ I’m convinced engineered organs are going to be on the market soon,” said Suchitra Sumitran- Holgersson, a professor of transplantation biology at the University of Gothenburg in Sweden. She has transferred lab-made blood vessels into a handful of patients and plans to offer them more widely by 2016, pending regulatory approval.

Seifalian hopes lab-made organs will one day be available for a few hundred dollars.