Now 50 books in, J.D. Robb crime series still has it

By SOPHIA ROSENBAUM
The Associated Press 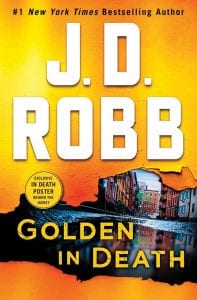 Lt. Eve Dallas, New York City’s finest homicide cop, is back again in the 50th book in the long-running “In Death” series, futuristic police procedurals set in the mid- 21st century. The prolific Nora Roberts, writing the series under the pen name J.D. Robb, pulls off the page-turning trifecta again: an edge-of-your-seat murder mystery sprinkled with a storybook romance and a team of cops you can’t help rooting for.

“Golden in Death” explores the deadly side of grudges. The first victim is beloved pediatrician Kent Abner, who only wanted to take advantage of a beautiful spring day: going for a run in the park, picking up some of his husband’s favorite foods at the market and having a romantic evening at home. But then a peculiar packaged arrived: a cheap wooden box with a golden egg tucked inside. Moments after prying the egg open, Abner’s throat closed, his eyes burned and he collapsed on the floor. A toxic vapor seeped out of the egg and killed him within minutes. 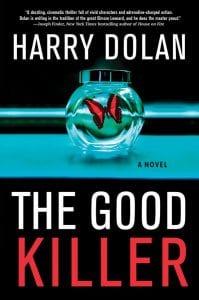 Eve’s investigation into Abner’s death keeps leading to dead ends, and then another person is killed by the same toxic golden-egg package. Both victims are connected to a private high school, and Eve and her team go on a twisty adventure that feels like the best possible crossover between “Law & Order” and a CW drama. The novel often feels like a throwback to the kind of drama that plays out in high school.

As in the previous 49 books, Roberts sprinkles a heavy dose of romance into the police investigation. Eve’s husband, Roarke, is the future’s McDreamy. A former criminal who ran schemes during his bad-boy days in Ireland, Roarke is now one of the richest men in the world, and won Eve over early in the series with his allure and some really good coffee. 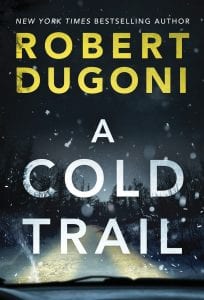 Their partnership, which includes teaming up on police investigations (Roarke contributes superb tech skills), is a love story for the ages and part of what keeps the series so strong.

Roberts began writing the “In Death” series in 1995, and some familiar and complicated characters are woven into all the books, including “Golden in Death.” Her intricate character development and powerful storytelling give both longtime fans and newcomers the ability to drop into the series at any point and escape into Eve’s world.

And the 50th book proves this series truly is the gold standard.

”The Good Killer,” The Mysterious Press, by Harry Dolan

Living off the grid may sound inviting – keep your head down, don’t get friendly with strangers, avoid social media and never allow yourself to stand out in public. Sometimes that sounds inviting, especially when daily life and social media become overwhelming.

But the reality is that one false move can put you right back in the thick of life as author Harry Dolan shows in his highly gratifying “The Good Killer.”

Iraq vet Sean Tennant and Molly Winter have been happily living an anonymous life in a Houston suburb, following a specific set of rules to keep them incognito. Then Molly travels to Montana for a yoga retreat and Sean goes to the mall to buy shoes the same day that unstable Henry Keen, angry over being rejected by a woman, begins shooting people. Sean’s training kicks in and he shoots Henry, saving countless lives.

Sean, “the good guy with a gun,” tries to slip away unnoticed but his actions were captured by many cellphones. His actions make national news and he’s hailed a hero, attracting attention he cannot afford.

The police need to talk to Sean to clear up the case, but he is also being hunted by people from his past. Small-time hoodlum Jimmy Harper wants revenge on Sean because his brother, Cole, died five years ago when committing a robbery with Sean. Wealthy art dealer Adam Khadduri wants the valuables that the two men stole and has sent two bodyguards after Sean.

After Sean connects with Molly in Montana, the couple goes on a cross-country trek, trying to hide while picking up stolen goods that Sean has hidden in several remote spots. When Sean’s identity is discovered by law enforcement, a savvy FBI agent and a Houston detective also are on Sean and Molly’s trail.

In just five standalone novels, Dolan has garnered a reputation for intelligent plots that gently weave in action with his well-sculpted characters’ believable motives and a soupcon of humor.

“The Good Killer” expertly delves into each character’s psyche, showing the humanity in each. While Sean and Molly are the focus, Dolan makes it easy to understand how Harper and Khadduri are driven by revenge. An especially heartfelt — and unexpected — finale elevates “The Good Killer.”

A cold case pulls homicide detective Tracy Crosswhite into a deep look into her past in “A Cold Trail,” Robert Dugoni’s latest mystery.

Crosswhite returns to the small town of Cedar Grove with her husband, Dan, and their new baby to enjoy maternity leave and stay away from their own home while it is being renovated. The town holds a rough past for her. Crosswhite’s sister was murdered while they were both in high school, and the last time she visited the area was to solve her sibling’s killing. Tracy is supposed to relax with her child while her husband works on a legal matter involving a real estate deal in the town. Of course when a mystery comes calling, she can’t resist.

A reporter investigating a cold case from a few months prior to the death of Tracy’s sister is killed in a house fire. Forensics discovers arson and learn that she was dead before the fire started. The main suspect is her husband, a local police officer. The chief asks Tracy to investigate and she soon discovers the woman had uncovered some new leads. The young woman who died was pregnant and the last person to see her alive was the man now suspected of murdering his wife.

Tracy Crosswhite is one of the best protagonists in the realm of crime fiction today, and there is nothing cold about “A Cold Trail.”