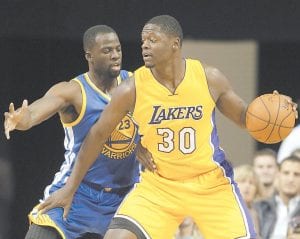 Former Kentucky Wildcats basketball star Julius Randle is in the first year of what he hopes is a long career in the National Basketball Association. The NBA’s Los Angeles Lakers are paying Randle $2,997,360 for his services this season, columnist Ira Combs writes. Randles is one of several former UK stars doing well as a pro. (AP photo)