Now that is a snowman! 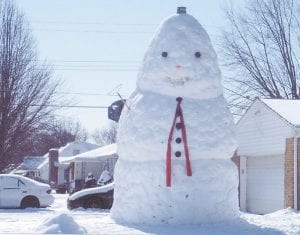 This snowman in Speedway, Ind., is 18 feet tall and was built by two brothers, Alan and Eric Burke. It was built in honor of their father, who died in October. The giant snowman sports two rakes for arms, solar-powered lights for buttons and eyes, a street cone for the nose with a bucket for a hat. (Photo by Jack Salyers)